Wishing her all the best and a full recovery x

Good luck Yazzy. I know your trio miss you! Lots of love from Grace and all the family.

Yazmin VBT surgery to carry on her gymnastics. 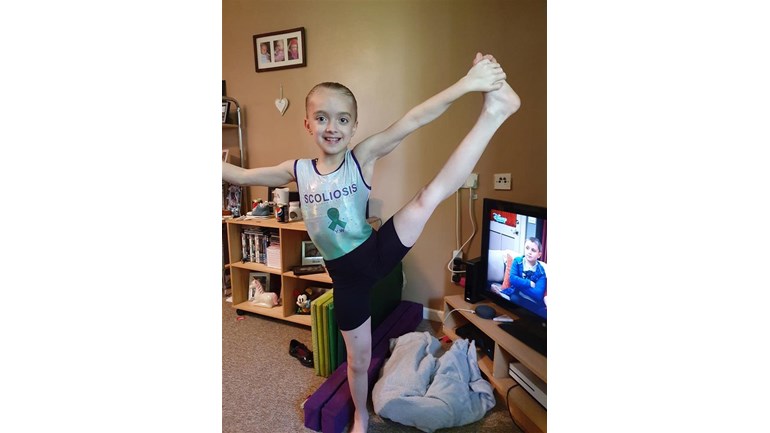 Everyone that knows yazmin she eats sleeps dreams gymnastics. Just before yazmin 9th birthday she was playing in the park when fall off the monkey bars. I took her to the hospital to get her checked when the doctor said she had signs of scoliosis. When I go home I started to Google what scoliosis was. We were waiting to see the consultant at Bristol children hospital. We got appointment really quick yazmin doctor was amazing explained that he thinks she has a small curve nothing over 20 degrees. He sent yazmin for a x-ray I was waiting behind the screen when I seen the picture come up I was shocked and thought to myself that's bigger than 20 degrees but trying to hide my shock from yazmin. We went back up to see the doctor who looked at her x-ray and said I'm really sorry but yazmin has a 80 degree curve. Sitting there in shock to then be told yazmin needs surgery asap. The words that came out of yazmin mouth was "can I carry on gymnastics after my surgery". To then be told she wouldn't yazmin broke down crying and so did I. Yazmin begged them to brace her was told it wouldn't work but they would try it to just prove to her it wouldn't work. Yazmin wore the brace as soon as she got it up to 23 hours a day and to prove the doctors it worked the only time she had the brace off was for gymnastics and a bath. The brace has stopped her curve from progressing. In this time we have found a surgery that will mean yazmin can carry on her gymnastics. The surgery isn't available on the NHS so we are travelling to Germany to have it done we have seen the consultant who has said this is the best choice for yazmin. We go over the 12th November 2019 to have the surgery. 12 weeks after having the surgery done and yazmin being up to it she will be back at her gymnastics. Please help a gymnast dream come true.