Donator left no message.
£1000 from Harnham Search and Selection Ltd

Donator left no message.
£2119 from Harnham Search and Selection Ltd

Donator left no message.
£40 from Jenni

Donator left no message.
£1809 from Harnham Search and Selection Ltd

Donator left no message.
£ (Private) from May

Donator left no message.
£10 from Calum 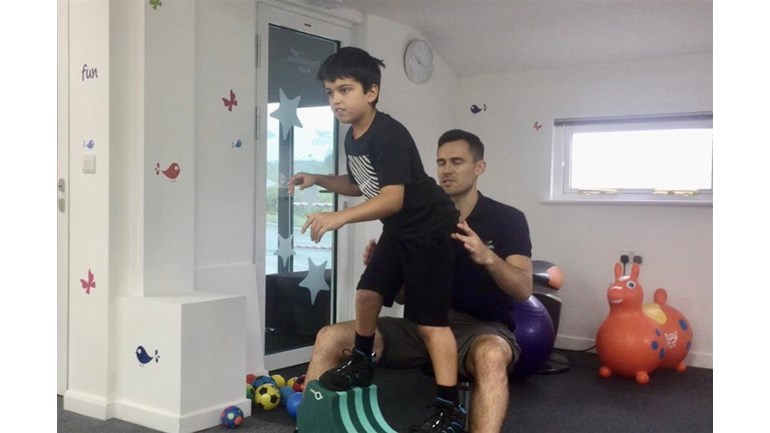 Problems when Xavier was born led to Cerebral Palsy, an injury to the brain, which caused his leg muscles to be constantly tight (spasticity) and work against him.  Xavier was unable to move at all without a frame and we were told there was nothing that could help him and we should accept that he would be in a wheelchair.

However, we found out there was in fact one thing (and one thing only) that could help him in a fundamental way; we found out about an operation called Selective Dorsal Rhizotomy (SDR) that could eradicate Xavier’s spasticity. We also found out about a pioneering neurosurgeon, Dr Park, in one of America’s best children’s hospitals in St.Louis who predicted that this operation, with lots of post-op physiotherapy, would allow him to walk entirely on his own and lead an independent active life.

In 2013, just before Xavier was four, we went to America where Dr Park performed the SDR surgery and the improvements have been miraculous. Xavier follows an intensive physiotherapy program and our holidays have mostly been therapy-based, taking him away for blocks of
intensive physiotherapy, or swimming school for people with disabilities.

But as Xavier grows and develops, he gets bigger and heavier and his growth spurts set him back, making him prone to falling. He needs physiotherapy almost every day so he can overcome his setbacks, get stronger and continue to make progress.

Before we had surgery the medical teams in the UK were dismissive, but now they have seen what Xavier has achieved he is being closely followed. He is now a symbol of what can be achieved with an openness to new ideas and constant effort and determination, but Xavier’s progress has only been made possible because of the intensive physiotherapy programs he has received, and this is expensive.

You can help us immensely by a one-off donation in any amount, a recurring donation (standing order), or by organising a fundraiser of any type for Xavier yourself -- running a marathon in his name, a cycle ride, a bake sale. The funds go to Xavier's designated Tree of Hope account, a registered charity, and they pay Xavier's medical bills directly.

My husband and I, and Xavier, send our thanks and love for your kindness and support. X

7.5% of all donations to Tree of Hope in relation to this appeal will be allocated to the general charitable purposes of Tree of Hope to
cover our core operating costs.