From Suleiman at SSP Xx

For beautiful baby Arlo and his family xxxx

Donator left no message.
£10 from Kean

Donator left no message.
£20 from Harry and Chloe 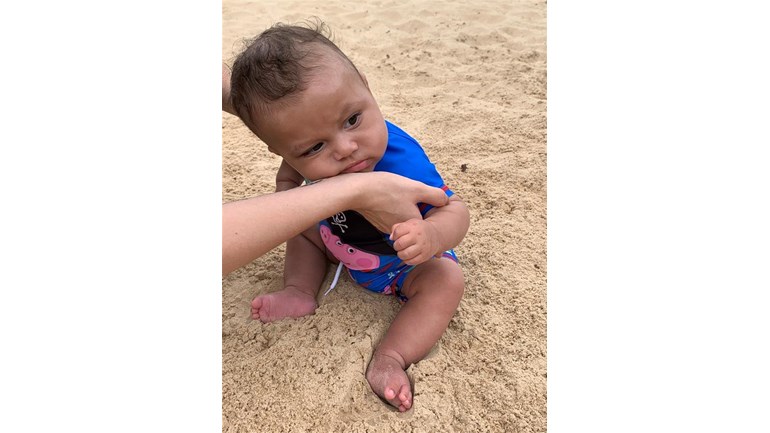 Thank you for the taking time to visit Arlos just giving page:  This is our baby boy Arlo; he is nearly 4 months old. we recently found out he has plagiocephaly. His measurements at his last appointment placed him high moderate to severe however due to the extent and how prolonged and flat the left side of his head is it was impossible to get the exact measurements due to his cranium not ending where it should be and actually continuing to remain flat down to his ear and the left side of his face, the private orthotist Eleanor from technology in motion who seen Arlo said because of this she would place him more in the severe category. He needs TIMband treatment which is helmet therapy to help him and improve his condition however the NHS don’t fund this treatment and treatment costs £2050. He needs a helmet to reshape his skull, the helmets job is to apply pressure to the bulging parts of the skull and relieve pressure from the flattened areas as a baby’s skull grows, he will need to wear this 23 hours a day for around 6 months.

We was advised to enforce repositioning techniques to try and help Arlo to stay of the left side of his head and even after months of attempting and using different pillows to assist this, encouraging him to sleep/nap on the opposite side, feeding him on his right side, doing regular tummy time etc. we have still seen no improvement and in fact is worsening as his getting older. The plagiocephaly has caused his ears to misalign causing them to be unsymmetrical and the left side of his forehead to bulge. It has also caused Torticollis: this is a condition where due to weakened neck muscles and individuals head becomes persistently turned to one side this is the case for Arlo and he has a left tilt due to this. Arlos neck control is extremely weak he is unable to support and hold his own head and when placed on his tummy is unable to lift it and remains with his head held to the left lying on the floor. He also suffers with seizures which are still under investigation and as of yet has not been diagnosed the seizures cause added stress to his Torticollis and after a seizure you can really see more how much he struggles with his head control and support.

He is not meeting milestones he should be meeting due to this and I fear that in the Long run not meeting these small milestones will effect him meeting bigger milestones. For example: if his unable to support his own head he will be unable to sit up, which will delay him crawling and walking and doing things every child should have the chance to achieve. There is a small age and time period that Helmet therapy is effective as the older a child gets their growth plates begin to fuse and once this happens reshaping the skull is a lot more difficult if not near enough impossible depending on age. So sadly time and the time period in general to raise this amount of money isn’t really in our favour.

As a mother I want to give my baby boy the best opportunity to meet important milestones and to make progress as it breaks my heart to see him struggling and to see other children his age do things he is unable to do. There is also the visual factor for the shape of his head we live in a cruel world and the thought of Arlo growing up and going to school and being picked on and bullied is awful school was bad enough when I was there never mind when Arlo meets the school age sadly children can be cruel just like the world we live in. I want to try and do everything I can to raise the money for the treatment my little boy needs and I will be really grateful for anyone that wants to kindly support us and make donations which will be forever appreciated or those who could even share Arlos story on social media and follow our journey throughout with us.