In loving memory of Uncle Tom.

Auction items, football cards and ladybirds sold. A little more to add to the total xx 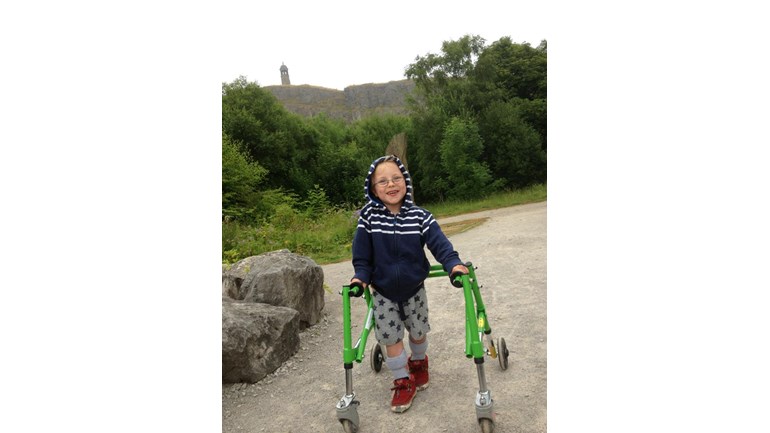 Theo Jacob Hunt was born at 30 and a half weeks gestation, on 31st May 2010, after his identical twin brother, Gabriel passed away in utero at 27 weeks. We were warned that there was a chance that Theo could have cerebral palsy due to the change in blood pressure through there placenta when he passed. However after a MRI in utero on Theo's brain, news looked postive as no abnormalities were detected.
Theo thrived in neo-natal after being transfered over 3 different hospitals over a 5 week period and came home on the 6th July 2010 at 35 weeks gestation. Since his birth and even before he proved that he's such a character and a true fighter. He kept up with most of his milestones but deep down I knew somthing wasn't right. He would constantly curl his toes and clinch his right hand especially with his thumb in. He didn't kick his legs as much as his big brother as a baby, or hold his feet up.
In August 2011, when Theo was still not crawling, our fears were confirmed by his consultant, Theo had Cerebral palsy, spastic diplegia, it was heartbreaking but at the same time almost a relief to have my past 18months of worry put to an end with a diagnose and we could move on with how to help him. Spastic Diplegia, primarily involves tightening of the muscles in the legs with little or no upper limb involvement. This is due to the area of brain that was damaged, the messages from this part of his brain to the nerves in his legs are muddled and misfire. Causing his muscles to be tight and spastic making it impossible for him to walk as you or I would. I was told he would likely never crawl, but I wasn't having that and neither was Theo, 2 weeks later he crawled! He started pulling to stand and cruising around furniture, in his own way. He prodominately toe walked and still does.
Since Theo's diagnosis we have fortnightly physiotherapy appointments and occupational therapy, he has to wear sold plastic AFO'S (splints) everyday to keep his feet flat, these at times get very sweaty and uncomfortable. He can walk well with his K walker and we encourage him to walk as much as possible, which doesnt take much as he tries no end to keep up with his peers and older brother. His attitude is unbelieveable, we can all learn so much from him.
Cerebral palsy does not get worse as it is damage to the brain either in utero, during child birth or a short time after birth. However the effects of Cerebral palsy do. He is starting to get tighter and has just got night splints, if these dont work he very soon will require botox in his right leg and will start to develop contractures (muscle degeneration and shortening that results in physical deformaties) that will make his mobility and movement more difficult and limited. As he grows he will need mutiple tendon lengthening procedures and as he gets older and heavier will likely become dependant on a wheelchair.
After 3 years of researching, the best option for Theo is to have the life changing operation Selective Dorsal Rhyizotomy (SDR). This is top level neuro-surgery and involves taking a piece of vertabra out of the spine and exposing the nerves that run from the brain to the legs, sectioning off the good, uneffected nerves from the bad spastic ones making Theo's muscles tight and cutting 75% of them. With the spasticity gone, and intensive physiotheraphy Theo will be able to learn to walk again with no spasticty or muscle tightness and his underlying weak muscles can be rebuilt up to maximum strength. When I first discovered this operation it was not available in the UK just in the USA and pioneered by Dr Parks at St Louis. Since then the operation has become available in the UK but still not on the NHS but privately funded. We are now faced with the daunting task of raising £50,000 to pay for the operation and 2 years of private physiotherapy for Theo. This is the only chance Theo will have to walk in an independant functional way, it will keep him out of a wheelchair and will mean he will never have to botox or any other lengthening procedures as he currently has no contractures and his muscles are still phyiscally fine. His diplegia could be completely managed through physio and utimately when he's older exercise, which would be life changing and no price can be put on. Theo is desperate to play in the garden with a football with his big brother, nothing could mean more to him or all of us.#mce_temp_url#