Lots of love to Jago x

We are donating to Jago's cause instead of buying 'family' xmas cards. Wishing Jago and his family a wonderful Christmas xx

Darling Jago, this donation has been a long time coming. Monies raised by the 'Girls' at out GIRLS NIGHT IN FUNDRAISER Stay strong brave boy, you are in our hearts & prayers xxxx

Proud to be supporting such a worthwhile cause. Please Everyone keep donating and raising awareness! xxxx

Keep fighting little one, god bless you all. 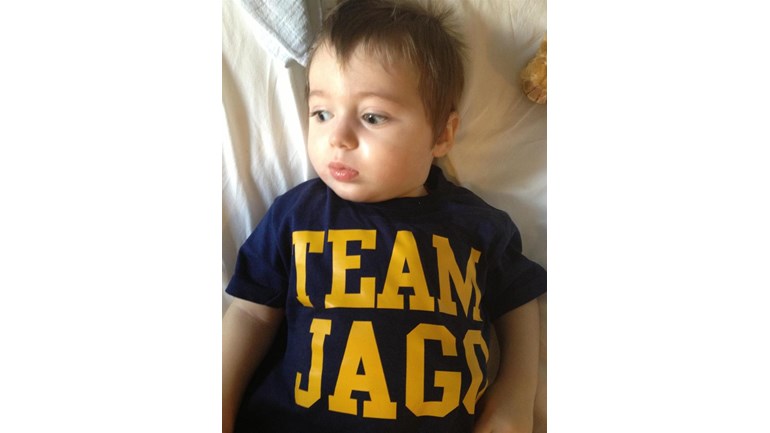 On 11 March, 2012 our lives changed forever. Our beautiful 17 month-old son Jago slipped away from the other children, all staying with us that weekend. He was missing for the briefest of time, but unfortunately decided to explore the duck pond at the bottom of the garden and fell in. He was found in quick time, but it seemed all too late.

A call to the emergency services brought first the police, then after twenty minutes, an ambulance.The paramedics fought for forty minutes with his lifeless body in our front hall, which was now full of uniformed and un-uniformed people, all fearing the worst, until one of the paramedics shouted “everybody be quiet! I have something…”. The next few moments were palpable, a collective holding of breath until the words “I HAVE A PULSE” rang out in the hallway.

I ran to my wife in the next room, already grieving our loss, such was the seemingly hopeless situation and I remember saying “it’s not over!”. Far from it, this was to be the beginning of a journey where the destination may never be decided.On that first night we were delivered the devastating news that he would probably not survive the night. We were told that if he did survive it could be with severe brain injury due to the lack of oxygen to his brain.

The following day he was still with us and we asked his consultant what his chances were of survival, he said that Jago had a 1% chance of survival.

In that first week, in our search for answers, we were given some targets for Jago to achieve i.e. breathing without aid, processing feeds, maintaining good o2 saturation and pulse which were given to us in terms of weeks. He achieved all of these in the first week.

3 months later, Jago is still fighting, he has been transferred to Tadworth Court in Surrey, UK’s leading peadiatric brain rehabilitation centre. He can breathe on his own and he can swallow small bits of purée food. His eyes are open and he is tracking certain lights, he can hear our voices and moves his head towards sounds. In the Consultants own words ‘he has made remarkable improvements’.

Only time will tell what affect the oxygen starvation has had on his brain and how this will affect the rest of his life, but the fact that we still speak about Jago in the present tense is incredible, miraculous and testament to both the care that he has received and his own strength of spirit.

It has become clear that Jago will need ongoing therapies (Physiotherapy, Occupational Therapy, Speech and Language and Hydrotherapy) when he leaves Tadworth, all of which are extremeley underfunded in the Community – and this is something we will need to subsidise with the support of friends and family contributions.

Various fundraising activities are being planned and information about these will be posted here and on Facebook and Twitter – If you would like to do something please post your idea or donate using the Donate button.

Please note should we exceed the target amount (of if we do not raise enough funds, or if they cannot be used for any other reason) the funds raised will go to the general funds of Tree of Hope to assist other sick children.