Here at the Tree of Hope, our team always enjoys hearing about our family success stories and seeing them reach their fundraising goals. It makes what we do here so worthwhile and we are always really interested to hear what our families have got to say and to have a peep into their fundraising journeys.

One of our campaigns ‘Team Amelie’ have stormed ahead with their fundraising campaign this year and have achieved their fundraising goal in just over two months. Amelie is 3 years old and lives in Stockport with her Dad Tom and Mum Sarah, little brother Alexander and Lou, the cat. Amelie has a brain injury called Periventricular Leukomalacia and has caused Amelie to have Spastic Diplegia Cerebral Palsy and means the muscles in her lower limbs are very tight. Amelie can walk short distances and attends regular physio which she absolutely loves. The family are under Alder Hay Children’s Hospital in Liverpool and in May this year, Amelie got the thumbs up for being an SDR candidate. Alder Hey referred the family to the Tree of Hope and they got in touch with us to find out about setting up a fundraising campaign. On raising their target in such a small window, we really wanted to find out how they ran their campaign and what their secrets to success are. 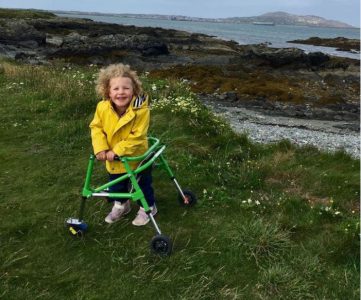 With the wonders of technology, Georgie in the Family Support Team got to meet Amelie and Alexander along with their Dad Tom who gave the low down on their fundraising campaign. It was really great to meet Tom and it was really evident to see that self-presentation, positivity and a switched-on attitude can go a long way when fundraising.

When congratulating Tom on reaching their fundraising target, he did tell us that the idea of fundraising was initially quite hard and despite coming with a little bit of stress, pain and exhaustion, it turned out to be smoother than expected due to the support the family has received. Tom said the campaign had been intense given the time pressure they were under as Alder Hey had limited operation spaces. Both Sarah and Tom really believed their local community made a real difference in achieving their fundraising goal.

We wanted to know how the family involved others in helping them fundraise, to which Tom admitted that they didn’t actively ask people for help, instead they made their campaign as strong as it could possibly be, which he said was evident when they had people approaching, asking the family what they could do to help. The family had lots of things going on in the community and friends of the family doing what they could at their places of work etc and applying for match funding.

Local community groups and schools found out about ‘Team Amelie’ on Facebook and other social media platforms which Tom said was a key factor in making their campaign a success. ‘Team Amelie’ has become a brand, he explained, and their campaign message was consistent and clear from the off and it seemed everyone “in our local and wider community knew who we were and what we were trying to do.” Tom said they had support from people and places they didn’t have any connection to which as amazing to see as they knew their relentless tweeting and posting was having an impact and kept supporters engaged.

The family had posters professionally made and were lucky enough to have some input from a marketing expert, something Tom believed in spending a bit of money and taking the time to get their marketing materials done properly to a high quality, made their overall approach look professional and attractive to support. This really goes to show that a strong campaign absolutely counts and can make a huge difference in getting donations and supporters!

At the Tree of Hope we completely understand that setting up a fundraising campaign is a big deal and means really exposing yourself, which isn’t always an easy thing to do. Tom admitted that the small-time frame the family had to raise the money in was a big worry at first but gave the family the boost to do the best they could. Tom has been amazed at the generosity of people is a real believer that it’s how to find those generous people which presents the real challenge.

We asked Tom if there was any advice he would give to families who are fundraising or thinking of fundraising. Tom first said to us for fundraisers to have confidence in what you’re doing and to seek and accept help wherever you can. Tom also made the really important point in having everything set up before it goes live, so that on the launch you have a clear campaign that people are drawn to follow and to transfer this to social media with constructing well worded posts as much as you possibly can and give your supporters updates so they are always engaged.

The family looked into getting a grant with Caudwell Children, however given the time frame they were restricted by meant it was too late to apply, so bear in mind deadlines for grant applications. Tom explained they consequently missed out on this opportunity but it would have made a real difference.

Tom and his family have done extraordinarily well and didn’t believe they would be where they are now having reached their target and continuing to raise for Amelie’s post-operative therapy and their hard work continues to bring the family opportunities.

If you are interested in building upon your fundraising campaign or have maybe taken a break but feel inspired to start up again, please call us on 01892 535525 or email families@treeofhope.org.uk.