From everyone at Page Nelson Solicitors xx

£5 from Love from Nicola, Antony, Joe and Lily x

£5 from Lots of love Kyle 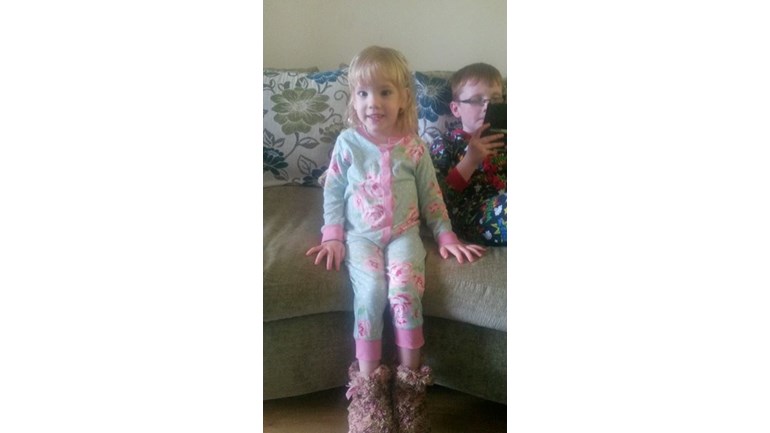 Tarli was born 10 weeks early by emergency  c-section, from what we understand she got stuck when been delivered.  Tarli - hope went straight to intensive care where she stayed for 6 weeks, during this time she received  3 blood transfusion, oxygen and different life saving medicine's.  The day before we brought Tarli home we had the devastating news that she had received some brain damage, and it would affect her movement and balance. Just before Tarli's 1st birthday we were told she had spastic quadriplegic cerebral palsy.

All of Tarli's limbs are extremely stiff, they also go in too spasms and are the main cause of Tarli's pain . All of her body is effected in different ways, she has trouble drinking and chokes often, her stomach muscles are weak, so finds it difficult to sit and she has to use so many different pieces of equipment everyday. To be honest I could go on and on about how CP affects Tarli but the bottom line is Tarli doesn't let it affect her...... she talks all the time, she taught her self to comando crawl, to feed her self, she taught her self to draw , use an I pad better then my self and her dad, and she could even walk a little way in her specialist walker! Tarli - hope  lives her life just like any other 5 year old and she has a infectious sense of humour with a beautiful smile!

Due to the Celebral palsy Tarli has had many stays in hospital, she had an operation on her hip in April this year, her hip was put back in to the socket using metal work. She was put in a spica cast, basically its a cast from her chest to her ankles with a bar across the knee to support it all. This was removed after 7 weeks. Since this operation Tarli has needed intensive physio, but unfortunately  her progress hasn't been what we were expecting.  She still can't straighten her leg or weight bare and she is still in an awful amount of pain. Now with the prospect of having the same major operation done on her left hip the worry is that she will deteriorate even more after another 7 weeks in cast.

I have researched about giving Tarli private physio on a weekly basis, this is what we want and need for her. I give Tarli 1-2 hours of physio a day to loosen stretch and build up her muscle's.  But I am not a trained professional and I feel it's now time for my self and Tarli to ask for help.  All I hope for Tarli is she will be able to do the things she could before her operation, to do the things she enjoyed most like standing in her standing frame, walk in her walker, use her trike that we raised so much money for, all of these things she hasn't done before April and probably won't do again for a very long time without this intervention.  Unfortunately going private is very costly and for Tarli to actually benefit continuous physio we are going to have to raise an substantial amount of money.

All I ask is please can you donate whatever you can too help me help Tarli. It really would be greatly appreciated.