I really hope you manage to get her the help she needs.

Only a small amount but hope it helps xx

All the best. I really hope the treatment works for you xx

Stem Cells to save Aimee's life 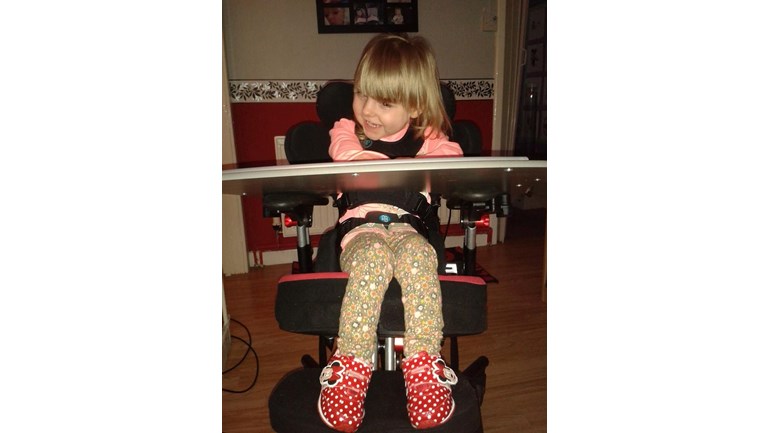 Aimee is a 2 year old girl with severe brain damage, cerebral palsy, visual impairment and uncontrolled epilepsy. She was born this way due to a lack of oxygen at birth and was not expected to live more than a few hours of life. She received cooling treatment for 48 hours and was sent for an MRI scan on day 3 of life. It was then that we were told that she had suffered severe brain damage and it was very unlikely she would be able to survive on her own. We made the decision to remove her from life support.

Aimee continued to fight and showed no signs of deteriorating any further and so we asked for her to be given some fluid or milk as the hospital had advised us not to feed her. As soon as she had her first bit of milk via an NG tube (as we were told she had no suck or swallow) she started to open her eyes. It was at that point we decided Aimee would be better at home with us caring for her using our own judgement. She was sent home at 12 days old on palliative care with a NG tube in place and we were given very strict instructions not to try and bottle feed her or give her a larger volume of milk than we had been told. Over the next 2 weeks she was very unsettled and cried a lot and I thought she may be hungry as she was only on 5ml of milk 4 times a day. I gave her a dummy to try and encourage her suck, it was then that it became apparent to me that she COULD suck. She never dribbled so she must have had some swallow. I tried Aimee with a bottle and she took to it straight away. Her first bottle feed she drank 6 ½ oz!!

As the months went by Aimee became stronger and stronger. She was able to eat mashed foods, was drinking well, and was moving her limbs more.

From 8 month of age Aimee started to suffer with seizures. We were finding ourselfs attending A&E more often than not and it was from this point that a cocktail of drugs began it's trial to try and help her control them. She suffers with seizures on a daily basis having anywhere between 1-8. She has 2 types of seizures, the daily type which are self sorting and last approximately 30seconds, they seem to pose no threat and just make her upset/uncomfortable. It is the other types of seizures that she has which require us to call an ambulance. We have an anti epileptic medication to give her incase one of these seizures strikes but so far it has proved ineffective. She has been hospitalized with these seizures 5 times now with the last 2 times proving to be very difficult in stopping the seizures. The 5 time we almost lost her.

We became desperate as we have been told Aimee is unlikely to reach her 19 birthday due to these seizures, we have even been told she will be luck to see age 10. We searched for hours online to find something that could help her and came across 'Stem Cell Therapy' We researched for hours, joining groups on facebook and talking to people who have had this done for their children. Almost all of the parent's we had spoken to and read up on had gotten the stem cells for help with cerbral palsy but had ALL reported that the stem cells had either reduced frequency of their children's seizures and they were then able to control them with drugs or they had been eliminated completely!

We have decided after talking with Dr's and other parent's that Aimee absolutely needs this treatment to survive. She has been accepted as a candidate to have the treatment in Panama City, Panama. The total cost is £15000. This works out around £10,00. We also need £5000 for flights and accommodation totalling to £15000.

We have previously raised money on behalf of our cause 'The Aimee Jade Project' To build Aimee a sensory room which is to be shared between Aimee and other disabled children in our community. We successfully raised the funds we needed in August 2013 and completed building in February 2014. We have appealed to the public to help us once again but now that it is for a more personal cause they seem to be reluctant to give again Aimee has so much more in life to give and as her parents we want her around for as long as possible as well as her sister Emily who is 3. The magic cure is just within reach, we just need a helping hand to get there. Please help us save our daughters life. Thank you for taking the time to read our story. Should we exceed the target amount (or if we do not raise enough funds, or if they cannot be used for any other reason) the funds raised will go to the general funds of Tree of Hope to assist other sick children. Rebecca and Gavin Fry.