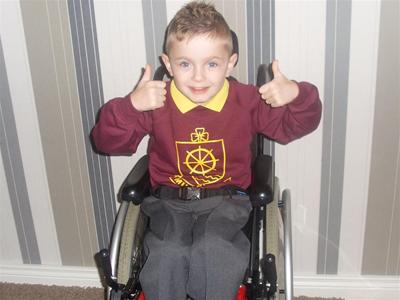 The campaign to help five-year-old cerebral palsy sufferer Oliver Dickey from Coleraine walk and play like his classmates has received the backing of sporting and TV stars.

Oliver Dickey was diagnosed with the spastic diplegia form of the disease at the age of 18 months and is confined to a wheelchair.

However, surgeons in the US are confident the Millburn Primary School pupil would be an excellent candidate for a life-changing operation that would allow him to walk – at least for brief periods.

British and Irish Lions captain Sam Warburton, singer Peter Andre and broadcaster Zoe Ball have all shown their support for a Twitter campaign aiming to raise £60,000 for the operation at the St Louis Children’s Hospital, 12 months of intensive physiotherapy and for specialist equipment to be installed at the family home.

Oliver’s mother Charlene said: “This surgery will be life changing for Oliver and for us as a family, but it can only happen if we reach our fundraising target.”

Just a few days into the fundraising effort over £2,000 has been donated through the webpage http://www.justgiving.com/helpweeoliverwalk

This is being backed up on Twitter via @HelpWeeOliver and the hashtag #helpweeoliverwalk.