Donator left no message.
£400 from Anonymous

Donator left no message.
£200 from Anonymous

Much love to my super hero 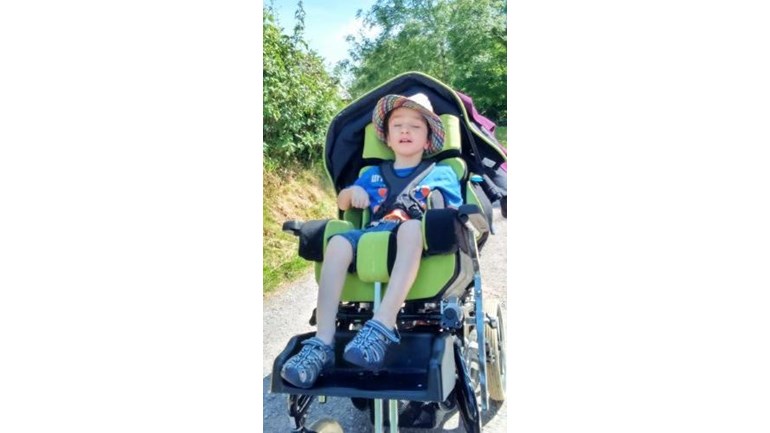 Meet Sam, a wonderful, happy and incredibly brave little boy who has been through more in his young life than most will ever have to face. He is my son, and my hero.

Sams brain didn't form correctly during pregnancy. We had no idea anything was wrong until our tiny baby suffered a massive seizure at 14 weeks of age - the seizures kept on coming, each one more aggressive than the last and when tests showed our boy had a catastrophic seizure disorder of infancy called Infantile Spasms our world fell apart. Since then Sam has had never had a day when he hasn't suffered seizures.. at his worst he suffered hundreds of seizures daily. The seizures devastated his development and left him unable to sit unaided, walk or talk. Sam uses a wheelchair full time with an oxygen cylinder and suction machine, and is 100% dependant on us for all his needs be it personal care or playing with his favourite toys. Sam's seizures are drug-resistant, despite three anti-seizure medications and a vagus nerve stimulator (VNS) which has significantly helped reduce his seizures he still experiences around 6-20 seizures every day of his life.

Sams list of medical issues is enormous, in addition to the life-threatening seizures he has very low muscle tone, visual impairment thanks to the severity of his seizures and is no longer able to eat orally, so is fed through a PEG tube directly into his tummy. Sam's low tone has also resulted in scoliosis (curvature of the spine) which will eventually need to be corrected surgically.  Sam needs specialist equipment, adapted toys and regular specialist therapy to help him live life to the full, the majority of which we have to fundraise for. Despite all of this he is one of the happiest, most loving children you could ever hope to meet.

Almost five years ago, we moved to a home that would be better suited to Sams needs. Over the past 2 years we have gone through extensive building work to provide Sam his first ever bedroom, a fully-adapted wetroom with hoisting to allow us to safely move him, and all doors downstairs widened to allow his wheelchair to pass through easily. It was our own DIY S.O.S.!

The work is far from completed however, and Sams needs continue to grow as he does. And thats where you can make a massive difference. The therapy, adaptations and equipment Sam needs are all expensive but open his world up exponentially. Please help us to raise the money our little boy needs; it won't change the World, but for one very brave little boy,  it'll mean everything.