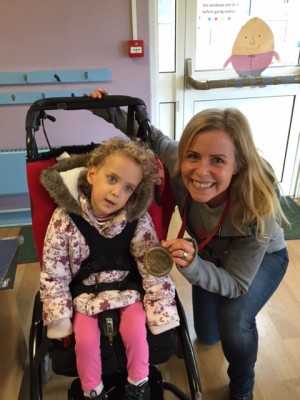 When Hope was not meeting all her milestone, like her twin sister was, she was later diagnosed with Cerebral Palsy.
She can not sit stand, or walk unaided  but is an incredibly happy, cheeky and beautiful little girl.

She became the inspiration for Jana Wilkins, who took up the challenge of her second marathon, in aid of Hope! As Jana sees Hope on a daily basis on the school run, she can see the huge difference the physiotherapy has and will make to Hope’s life.

Running the marathon has not only been a brilliant personal achievement for  Jana but, has enabled  her to raise over £1000 for Hope, which has in turn meant that Hope will be able to have another six  months of Hippotherapy.  ‘What she wrote has made me cry every time I have read it. She’s raised £1005 so far which we worked out pays for at least 6 months worth of Hope’s Hippotherapy sessions on a horse.’ Rachel, Hope’s mother

Jana completed the marathon in just under four hours at, 3h58 and hopes that one day Hope will be able to run too. 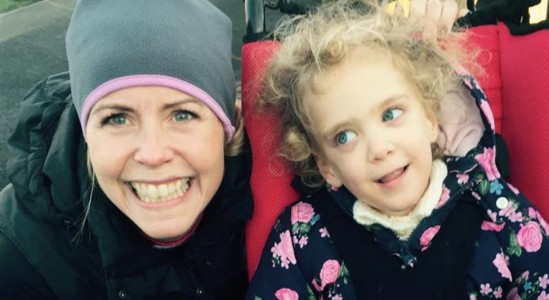 You can read Jana’s story and donate to Hope’s campaign here..

Running the London Marathon for Hope