From the officers of Hillsborough Presbyterian Girls Brigade

Great Charity night from what we can remember! Upside is we're off on our Hollibobs Sherwins we hope you know what you have let yourselves in for!

Thanks to you Ross we are going to take on the challenge of flying with a wheelchair . . . . Italy here we come 😃✈️🇮🇹☀️🏊🍷🍕🍝

Sorry we weren't able to make the ball (and that this is so late), but we're sure must have been a fantastic evening. Tha Webbs 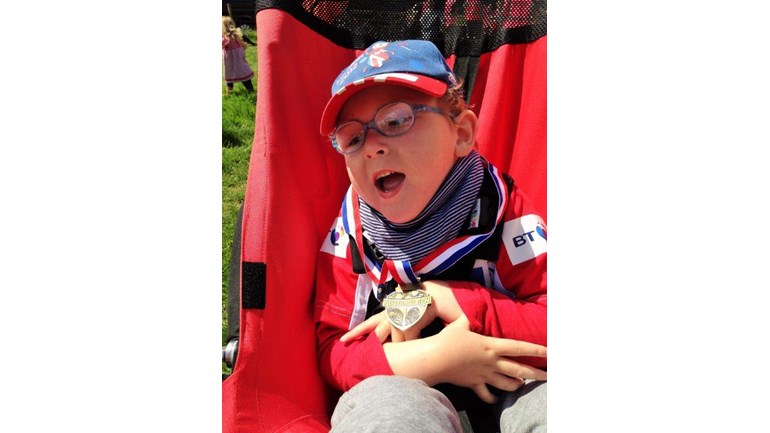 Who knew fundraising could be so much fun! Thanks to all!!

The sun shone, the kids had a ball and everyone finished, including our three para-triathletes. Watch all the action here - https://www.youtube.com/watch?v=_drLFp6vZJA

Ross can't swim, cycle or run by himself, so his Mum & Dad are helping him do his first triathlon to raise money for an 'eye-gaze' computer system, a tracking hoist and other home adaptations to make Ross's daily life as safe, comfortable and stimulating as possible.

Ross is 6 years old and lives with his Mum & Dad and 2 brothers in Surrey. He has an undiagnosed seizure disorder which means he is unable to sit, walk, talk or play independently. The money raised will fund a computer system that uses eye-tracking technology to allow Ross to play fun games by himself and give him the chance to learn skills to communicate and make choices. We also hope to raise enough money to fit a tracking hoist in our main family room allowing Ross to move around the room in a standing sling. And as Ross gets a lot of enjoyment from interacting with dogs we've decided to bite the bullet and get a dog.

Once we move to Scotland Ross will need adaptations to our new home to create a downstairs bedroom and wet room, including hoists  and other equipment to make it fit for his needs - your support makes this possible.

In preparation for his first activity to raise funds Ross is currently in training for a triathlon. He is doing this using a specialist bike and an all terrain jogger buggy, helped by his Mum & Dad! It's planed to take place in the Spring 2015, and will be the first of Ross's fundraising challenges over the coming years.

Why a triathlon? Ross has always loved the feeling of the wind on his face. Since he was a baby he has found this calming and funny. In training he laughs the faster and bumpier we go. Ross also loves swimming and he kicks excitedly in the pool. He can experience a level of freedom in the pool that is not possible anywhere else as he is able to move around the pool by himself using a flotation device.

Follow Ross on Twitter @RossTheSmiler. To learn more about Ross's early years, feel free to browse the blog at www.archiesmountain.blogspot.co.uk