To Joel from Stephanie, Mark, the boys and Della-Jo xx

... because if we all help each other a little, the world will be a better place!

Here's to you Joel. You keep working them muscles and I'll keep on knitting! Love from Teresa x

Work hard Joel I know you can do it, lots of love from Edith and Savannah x

Good Luck Joel, you are worth every penny ! All our love, Mandy, Steve & family x

Here's a little something to help you achieve your target x 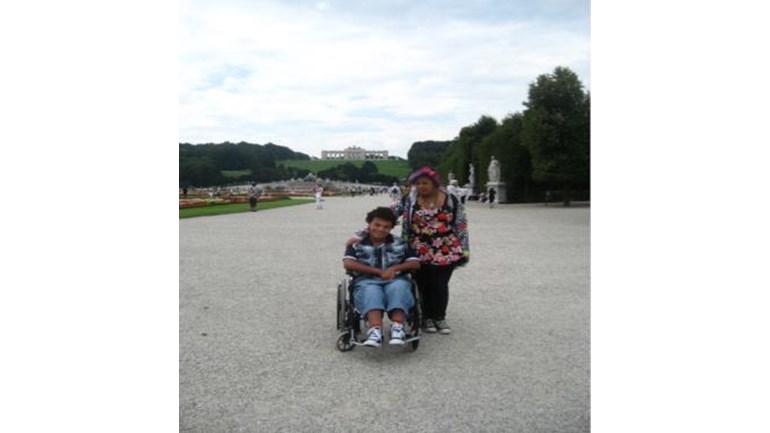 Thank You For Taking The Time To Look At Joel’s Page.

Joel is a 15 year old football fanatic; he is also sports mad and a keen wrestling fan.
Joel was born 10 weeks early and weighed just 2lbs.

He was diagnosed with cerebral palsy at 6 months, a type called spastic quadriplegia. In the beginning we were told that Joel was blind and deaf and that he would probably never even sit up, and more than likely never be able to do anything for himself. For those first months of Joel’s life we tried various therapies until we came across conductive education, which Joel attended at the scope building on Market Road London (Peto UK). This was the first glimmer of hope we were given, we learnt that Joel appeared deaf and did not track objects with his eyes because he had not learnt to move his head. With the help of conductive education Joel has gone from strength to strength. He can now sit by himself on a stool and can also stand for short periods of time which is a massive achievement for Joel. Before we first went to Peto in Budapest I believed that Joel would never be toilet trained because of his muscle tone. I’m delighted to say that I was proven wrong after spending just 1 month at the Peto institute. Joel has made great progress since he first began attending Peto in Budapest in the year 2000.
Joel’s muscles feel much more relaxed, which very much reduces the pain and stiffness in his limbs. Also his confidence soars, especially as he gets to spend the entire day out of his wheelchair, which in normal circumstances is impossible. It was amazing for me to see Joel sit on an ordinary chair at a table and not strapped in a contraption