Given in memory of Margaret, with love + many, many prayers that Ralph’s treatment will be successful, which was Margaret’s enduring belief, ‘That all things are possible with GOD’ x

Remembering dear Margaret, and in support of Joel’s preschool friend. Much love from Eils and Joel

Just touched by your story and praying for your gorgeous boy and family.

£ (Private) from Tishy and Toby Allen

Part of the funds raised in the Run for Ralph on Saturday 17th August, thank you everyone for your help and support! Xxxx 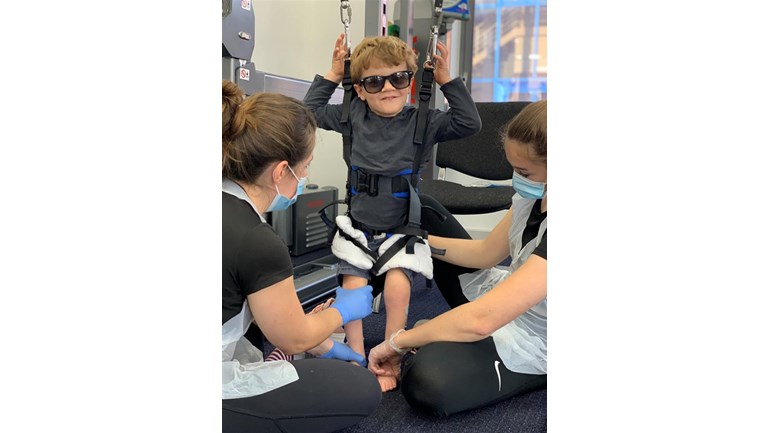 NB – the total amount shown on this page is the cumulative funds raised, it isn’t the cash balance.

Eight hours after birth Ralph became lifeless and had to be resuscitated. Bruises covered his head and the majority of his body. He was put on a ventilator and in an induced coma. The cause of this episode is still unknown but it has left him with brain damage and incomplete paralysis from the waist and below (T12).

The first few weeks were bleak, empty and full of fear, each day brought new ideas of what had happened, along with varied eventualities for his future. As the leads of medical treatment and diagnosis ran dry, so did our faith in the system. We were told that he would never be independent, that he would be severely disabled and they couldn’t rule out this “episode” happening again. We didn’t think it was possible for our hearts to break so many times.

Then one day, at three weeks old we saw his little toes wiggle, on sharing this with the doctors we were told that “parents often see what they want to see out of desperation.” However, we knew what we had seen and it gave us hope to fight for more for Ralph and a determination to research other options.

After seeking private physio, acupuncture, and osteopathy we began to feel more in control of Ralphs recovery. Input equals output. Then one day when Ralph was 6 months old, whilst watching the 6 o’clock news, we learnt about the opening of a specialist spinal injury rehabilitation centre for kids, Neurokinex, Crawley. This was the beginning of something new for Ralph, a vision that the impossible is possible.

December 2018 (Ralph 1 year old) - 6 months of treatment – Ralph regained some sensory to his lower limbs, he was able to crawl like a caterpillar and could momentarily sit up (this doesn’t seem like much but at diagnosis we were told by the doctors to expect that he would never be able to do this!). At this point we felt confident that the treatment Ralph was receiving was having a huge impact, and we needed to up the game.

In Ralph’s second week of the programme he began crawling with reciprocal legs, it felt like a miracle! At the end of the programme Ralph had recovered the majority of his upper trunk and had gained a core abdominal strength that I can only describe as superhuman. His strong core allowed him to find balance whilst sitting, thus increasing his independence and allowance for more social life with his peers. Paralysis doesn’t just affect someone’s ability to walk, bodily functional issues are damaged too. So when we saw improvement to Ralphs motor function and limb activity we have to also assume that recovery has been made to areas of Ralph’s body that we cannot see or currently assess. Recovery is recovery.

The intense programme cost us £10k, at £80 per session. We are so thankful to those who gave so generously during this period and to those who raised funds enabling Ralph to undertake therapy. It really was life changing for Ralph and we will forever be thankful.

July 2020 – with five months of no intensive therapy due to COVID-19 we began to see a decline in Ralph’s core stability. He would often lose his balance which would regularly result in broken teeth, bruising and tears but his aptitude to do life independently was ever increasing.

March 2021 – after watching his brother Wilbur play around with a walking frame Ralph decided it was time for him to try walking! It was a very proud moment. Although we know that the weight bearing element of Ralph’s assisted walking is extremely limited, the leg/step control that he has is something we didn’t think we’d ever see him achieve.

Neurokinex – Ralphs standard sessions (three a week) cost us around £10k a year, for us this is the foundation of his recovery

Orthotics – to help support Ralphs deformed and weak ankles he uses AFOs. These cost around £2,500 a year

Trike – Ralph is able to ride a therapy trike, but the cost of this is around £3.5k and the waiting list to have one made is lengthy. We are in the process of choosing a manufacturer but the need for funds is always an obstacle

We thank you from the bottom of our hearts for any donation that you can give - it means so much to us and, of course, to Ralph.