Wishing you all the best things! Ró x

With lots of love xxxx 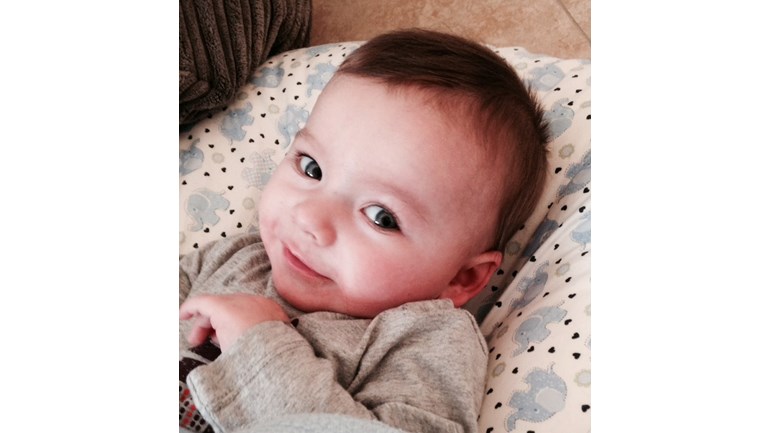 Please help us raise £100,000 for Tree of Hope to help Patrick receive therapies and treatments to support his long-term physical and mental development.

Our son Patrick, who was born on 1 August 2014, suffered severe brain damage at birth. As a result of this tragedy Patrick has enormous challenges ahead and we are determined to give him the best shot at defying his prognosis, and we ask for your help to do so.

Patrick was born with no heart rate, blue and not breathing. It took over 10 minutes of resuscitation for him to take his first breath. Patrick was rushed to St. Mary's hospital in London where he received "cooling" treatment for 72 hours, and during which time he could not breathe unassisted, was unable to suck or swallow, was fed by a tube and suffered major seizures. We didn't get to hold him until he was over a week old. He spent three weeks in intensive care during which time he learned to feed orally, started to open his eyes and eventually we heard him cry. No parents were ever as happy to hear a child cry! Patrick had several EEGs, two MRIs, two lumbar punctures and numerous seizure medications before coming home with two terrified and exhausted parents. The MRI showed severe global damage to his brain, which was heartbreaking news for us and our families. Patrick has since had an early diagnosis of quadriplegic cerebral palsy with dystonia. We will not know the likely severity for years, but there is persuasive evidence that outcomes for children like Patrick can be improved with intensive early intervention from the right specialists.  As a result, Patrick’s weeks are filled with a succession of appointments with physiotherapists, feeding specialists, gastro consultants, neurologists and many others.

In addition to Patrick's cerebral palsy diagnosis, he is also being investigated for a rare metabolic disorder. It is likely that the symptoms are connected with his brain injury, but given the potential severity of the condition, we wish to pursue further testing and treatment in the United States as there is limited expertise in the UK.

We have learned so far in our journey that caring for a child with special needs is traumatic, exhausting and incredibly hard work.  However, we are rewarded for the hard work when we see progress, like the first time Patrick reached out to grab a toy after months of holding toys in front of him, and we take great joy in seeing him achieve little "inchstones".

Therapies cost a lot of money. We want to give Patrick the best opportunity to reach his potential and we need your help to get there.  As well as helping to fund his private physiotherapy and specialist equipment, we would like to take Patrick for stem cell therapy, a cutting edge treatment which can deliver improvements in functionality in children with cerebral palsy - something we have witnessed at first hand.  Please help us to do this by giving generously to Tree of Hope, and in doing so help to fund some of Patrick's treatment and care needs over the coming years.