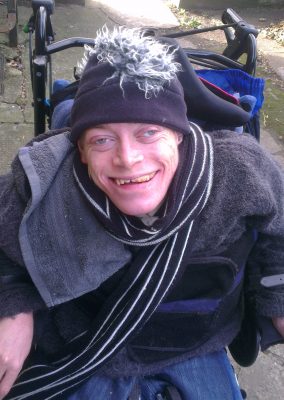 Hello! My name is Gregory Mott and I’m 23 years old. I have cerebral palsy quadriplegia which means I have very limited use of my arms and legs. As a result of this I am a full-time wheelchair user. Separate to my cerebral palsy I have complications with my wind pipes and have had several operations to correct this. I have also had a tracheostomy fitted to help with my breathing. I am unable to talk, but this doesn’t stop me from communicating with people around me. I use facial expressions and my eyes to communicate. I have a team of development workers from a company called Value Independence that take me out on weekdays.

Three of the most important things in my life are socialising, music and community. So when I was planning a project with one of my workers, it made sense to organise a charity music gig. So Jack, one of the team, and myself planned and organised the gig from start to finish. I chose a local pub in Haverfordwest as a possible venue and arranged a meeting with the landlords. The Bristol Trader is a very friendly pub and was more than happy to accommodate our fundraiser. Once we had a venue we looked at possible charities to raise money for. Jack helped me get a list of British Charities to look through and when I got to the Tree of Hope I knew this was the charity I wanted to support! One of the main reasons for supporting the Tree of Hope was that I could connect with many of the stories from the website as I have gone through similar experiences myself. Much of my childhood was spent in and out of Great Ormond Street and Heath Hospital. It was touch and go for a while, but nothing was gonna keep me down!!

So once we had a venue and charity sorted, the next thing was to book in some bands. Using the internet and people I knew I was able to book in 4 top local acts which provided a fantastic night of entertainment! We had an acoustic duo called Harry and MK who started off the night. They set a very high standard for the rest of the acts to follow. Next up was Twozone, a 3 piece band who asked my Dad to sing a few tracks with them on the night! The last two acts were Aseti Etmi who delivered a brilliant set that warmed the crowd up for the final act, Beneath the Reef. A 7 piece ska-band that recently toured the UK!

The night was a great success with a really good turnout of very generous supporters. Local businesses and individuals kindly donated prizes for a raffle which boosted the total we raised to a staggering £981! We are still receiving late donations so hopefully we will break the £1000 mark!

After reading about Jay I decided to donate the money I raised to him as one of the things he wants to do is play football with his friends. This is something I have always wanted to do myself, and would love to help give somebody that opportunity.

I have learnt a lot from organising this event and really enjoyed the experience. So much so, that I have decided to regularly organise events to fundraise for charities and individuals that would benefit from some extra financial support!

Thank you for listening to my story!