just sent with lots of love - be brave little man

What in God’s name are the NHS playing at, It would take £100,000's to make that slapper look anything other than another hideous Jordan mutant! Hope the little lad gets well very soon.

See you running in no time

All the best little man.

Keep fighting little cowboy. With a Mum like yours you cannot fail

£50 from Eileen Mary and Pam

Hope Oliver's surgery is a success and that you are soon happily exhausted running round after him! Love Gill and Adam (2)

Oliver wants to join in! 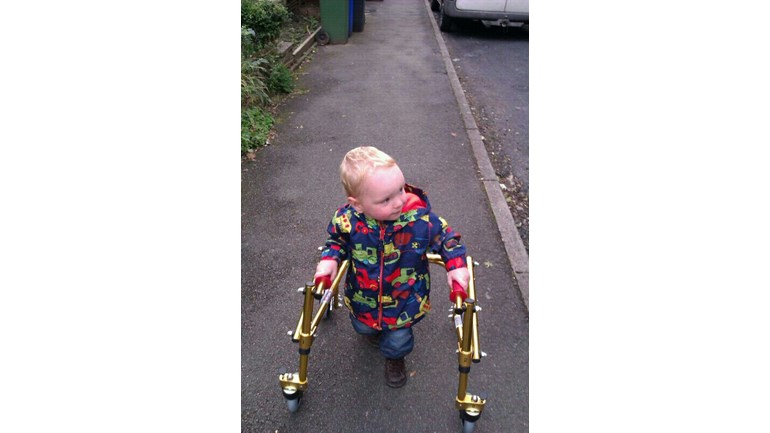 Please help me raise money for my son to have on-going after care following his SDR surgery he has to have private physiotherapy plus extra equiptment.

Oliver was born at 32 weeks and was in special care for over 3 months with a stomach infection.  This made him very unwell and made the first few months of his life very difficult.  At such a young age I got a glimpse of what a determined little guy Oliver is because he faught off the infection and came home.

As Oliver grew, I began to notice that his physical development wasnt as quick as his peers so I saught medical advice.  At 18 months old, he was diagnosed with Cerebral Palsey Spastic Diapligia.  The extent of the condition was unclear at this stage so the past 12 months have been none stop physiothereapy and various other medical appointments. Now he is nearly 3 years old and is only able to walk with a walking frame. He needs regular physio and has to wear splints on his legs.

Without the surgery it is highly likely that Oliver will need a walking aid and further treatfment for the rest of his life.

Oliver is the most determined little boy anyone could ever meet.  He doesnt let his condition get him down in anyway and just gets on with life. He loves nothing more than playing with his friends.

Even though Oliver wouldnt complain, as his mother it breaks my heart when he is left behind as his friends run off to kick a football or to bounce on the trampoline.