Wishing you all the best

Fantastic to see you walking at the Ballyraine NS Sports Day! You well deserve the medal

Best of luck Iggy, Moya, Lorraine, Louise and Patrick! We'll be thinking of you from our leaba.

Donator left no message.
£20 from Eamonn

Wishing you and Paul the best.

Mammy, I want to walk 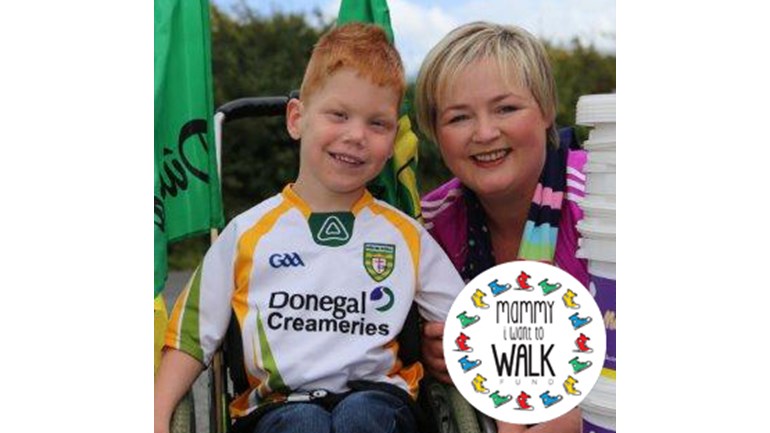 My son Paul is 5 years old and has started school this year. Paul has spastic quadriplegic cerebral palsy. Paul has had physio, occupational therapy, speech therapy, conductive education, Botox injections, 3 weeks at Peto Institute in Hungary and medicines, to name just a few.Since Paul could talk he always told me "Mammy, I want to walk". It broke my heart to see him stuck in a wheelchair not been able to run about with his brother and sister or even to be able to pick up a toy from the floor that he wanted to play with. Paul is a happy boy, playful and full of devilment! As his mother, I always fought to get him the services and therapies he needed. While the HSE gave Paul what they could they could never offer him the opportunity to be able to walk.

Then I came across an operation in America called Selective Dorsal Rhizotomy (SDR). The operation involves cutting some of the nerves in Paul's spinal cord that are misfiring the muscles in his leg. Paul has been assessed for this operation and has been accepted. The neurosurgeon (Dr. Park) in St. Louis hospital, Missouri expects Paul will be able to walk with the aid of crutches/walker if he gets the operation.

This operation has been a successful part of cerebral palsy treatment in the USA for years. The NHS in the UK have just recently decided to trial the operation for 120 children in the UK. By the time the operation is available in Ireland it will be too late for Paul.

We need to raise a minimum of €60,000 for Paul's dream of walking to be a reality. This would cover the cost of the operation and the first 4-6 months of a two year physio programme which all has to be funded by us privately as there is no HSE funding available for such an intense programme.

If we exceed the target amount or if we do not raise enough funfs, or if they cannot be used for any other reason, the funds raised will go to Tree of Hope to assist other sick children.