Your gonna smash the hulk Lewis, you got the original fairy god mother

Donator left no message.
£1500 from Anonymous 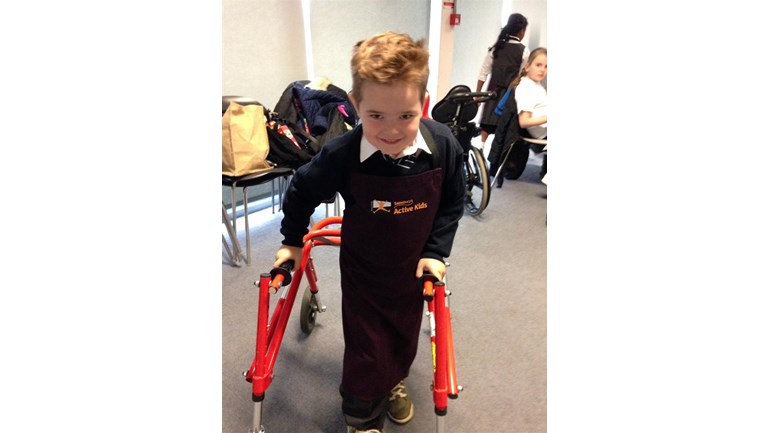 My name is Lewis and I am five.  I like power rangers and Captain America and The Hulk

My legs don't work properly and that means I can't walk.  I have to have lots of physio, and when I am bigger I hope i can walk and fight The Hulk. So does my mummy!

Lewis is aged 5 and lives in Towcester, Northants. He is an exceptionally happy little boy who is rarely seen without a smile on his face! He lives life with a condition that presents like Diplegic Cerebral Palsy. This means his legs dont work and he is unable to walk unaided. His speech and movement is also limited. Lewis is extremely bright at school where he got 6 out of 6 in his last spelling test and is seen as quite a catch for the girls in his class!!!!!!

Lewis has been accepted as a good candidate for a specialsit operation in the US called Selective Dorsal Rhizotomy.He would benefit greatly from this operation, hopefully it will help him walk unaided and even possibly help his speech and movement improve. But the current weekly  physio treatments and the potentially life changing operation come at a huge cost and that has inspired us to get funraising and help Lewis achieve his dreams........

Every penny raised will go towards improving this amazing little boys life and hopefully change it forever...

Well here we are 1 year later and Lewis has had his operation in America. It was a hugely emotional and hard thing to do putting your 5 year old through such a life changing operation but the results so far have been amazing. Lewis is now able to put his feet flat on the floor and can stand holding bars to have a wee...a massive achievement when your a boy!!! He was in a wheelchair pretty much full time before his op and now the wheelchair only comes out for long distances as he is able to use his K Walker (a walking frame) for most journeys especially as it now has all terrain wheels on it!

He still has to have intensive physio 5 days a week and none of it is covered on the  NHS he does this with a smile on his face and never moans. He is a little hero and inspiration to many, but there is still a long way to go and he's been given a great chance to improve and hopefully become an independent walker one day.

This all comes at a huge cost though so we are still trying to raise money so Lewis has the chance he deserves to be independent .

Thanks for reading and donating it means a huge amount to me, his mum,  our family and Lewis who is still saving the world one day at a time!!!!!!!

As we head towards the 2 year anniversary of Leiws's operation things are still improving all the time for him. He still has 7 and a half hours of intensive Physio each week and we regularly head to Wales to a specialist centre that does  training especially for kids who've had the SDR operation. Lewis tries so hard and does all his work with determination and a big smile on his face!

Lewis can now stand unaided for 2 WHOLE minutes and is practicing balancing in a step position. He has also managed to take a step unaided and he is really trying to take more. This is really hard when you are 7 and you've never felt what its like to take a step and move forward. His brain is working overtime trying to take it all in and learn. Around school Lewis is now able to use tripod canes for short distances and the distance he travel in his Kaye Walker has increased greatly.

Lewis has persevered and can now get in and out of the car on his own which is great as he is getting heavy to lift! He has also managed something which we presumed would be impossible ,which is to swim 10 metres on his back with no floats or swimming aids.

His confidence has grown so much this last year that he decided to take up the drums, already gaining his first certificate for his skills!!! This has ignited a passion in rock and guitar based music and he has shown what amazing talent he has for the Air Guitar!!!!

Thanks as ever for all your continued support in Lewis's quest for independance. It means such alot to this determined little boy, myself and our family.

P.S. Lewis continues to fight the bad guys and save the world one day at a time!!!!