10 more Scott! Great cause mate and great work on that workout 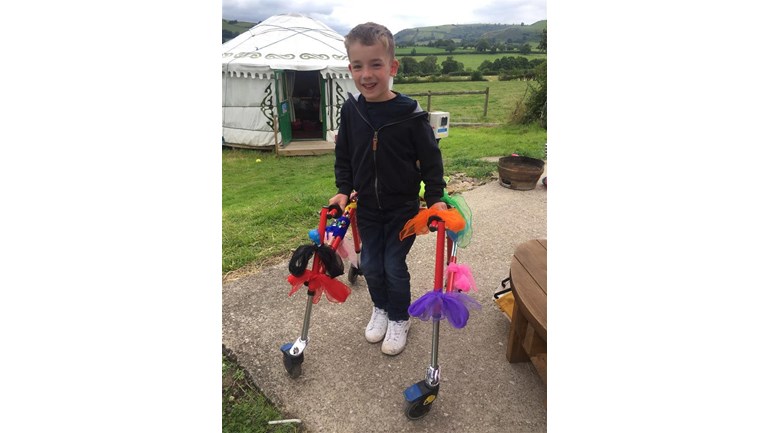 Leo had his operation on the 15th August 2018, it has been very tough journey so far and now we are out of hospital, the physio must continue, please  help us reach our goal and let Leo stay on his feet!

I have changed our original target too, as this wasn't sufficient enough to maintain the amount of physio needed.

Thankyou again for your support it means so much!

Thanks for taking the time to visit my JustGiving page for Leo! 💙

As some of you may know Leo is a very happy cheeky 8 year old. But He didn't have the most easiest start in life when my waters broke 10 weeks early and Leo came along!

Although I was beaming with pride of my new bundle of joy  I knew I was in for a tough road ahead. With Leo having bleeds on the brain and meningococcal septicaemia meningitis so early after birth it became clearer that Leo would have disabilities and complications as he got older.

Even though Leo has Cerebral Pasly , Hydrocephalus and absent epilepsy he is one very bold character who everyone fulls in love with. 💙

Although Leo has already had the selective-dorsal-rhizotomy (SDR) which has helped in many ways, his walking has began to deteriorate because of the position of his feet and pressure sores have already occurred on his feet ☹️. Recently we went to one of Leo's hospital appointments with his orthopaedic consultant who revealed some devastating news.

He revealed  that Leo would need major surgery on both Leo's resulting in the equivalent of 5 operations on each Leg from the hip downwards if he wanted to keep him on his feet and walking and afterwards  intense phyiso to be able to get him back up on his feet and walking again. Anyone who knows Leo will know how important this is too him just to be able to move his legs! He is most happy when walking with his frame or riding a trike and being independent just like any other 8 year old.

So as a mum I have started of fundraising to help towards the cost of Leo's Physio after the operation to make sure his dream of staying independent and on his feet Becomes reality , with the help of you lovely people as he continues each day with so much courage and determination 💙

What ever you can contribute will ever so be gratefully  received.

Thankyou so much for reading our story and for your support. 🙏

Donating through JustGiving is simple, fast and totally secure. Your details are safe with JustGiving – they’ll never sell them on or send unwanted emails. Once you donate, they’ll send your money directly to the charity. So it’s the most efficient way to donate – saving time and cutting costs for the charity.
Should we exceed the target amount (or if we do not raise enough funds, or if they cannot be used for any other reason) the funds raised will go to the general funds of Tree of Hope to assist other sick children.