Donator left no message.
£2000 from Anonymous

Donator left no message.
£7000 from Anonymous 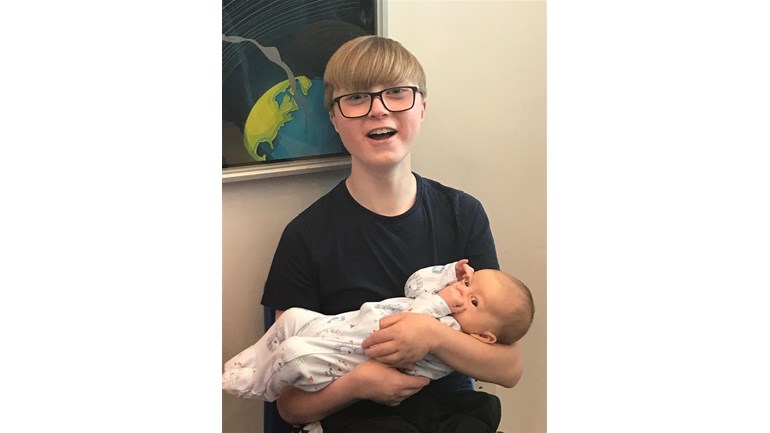 James is our inspiration. James has been in constant pain since a young age. At age 1, he was diagnosed with aggressive juvenile arthritis. This was followed by an autism diagnosis at the age of 9. Having spent much of his life in and out of hospital, last year we were told that James has a very rare genetic disease called Multicentric Carpotarsal Osteolysis Syndrome.

This is a very rare skeletal condition which erodes the bones in his hands and feet. It often progresses to severe bone destruction and multiple joint deformities. This is very painful, as his bones begin to disintegrate. Everyday, with great dignity, James copes with increasing levels of pain. Part of the condition is the development of fatal kidney failure. Sadly, we anticipate that we will have to say goodbye to James earlier than any parent would ever hope.

James is such an example to us of all. Despite all that he's living with, he has never been a victim of his condition and pushes himself constantly. James is 14 now and has three brothers and one sister. As a family we grow more in love with him every day as his character and determination develop and grow. Always being an outsider, with his autism and physical limitations, he constantly amazes us in his ability to engage and talk to anyone from the homeless man to the international visitor to make them feel at ease and that they belong. He is an inquisitive learner, creative, and loves people and learning from others. At times, as parents, it is unbearable to see our young teenager battling daily to be the same as any other teenage boy. We wish we could take this burden from him, but sadly we can't.

As any normal teenager(!), James wants to be independent. Given his condition, it will be very difficult for James to be independent in the environment he is in at the moment. James' bedroom and the bathroom is on the first floor of our house and he is finding it increasingly difficult to go up and down the stairs multiple times a day. This, alongside many other aspects of daily life, will become an increasing problem and frustration for him over time. Battling a condition that is constantly stealing away his dignity and self worth, we want to always fight to give James the dignity that he rightly deserves as a young boy. For this reason, we would like to convert our brick outhouse into a living space that would be accessible for a wheelchair and well suited to his needs. This would enable him to shower independently and live as comfortably as possible, whilst being close enough to us so that we can care for him as he needs.

Over James' lifetime, we have fought hard in many areas for the best for him. We have tried other avenues to raise the funds for this, but have been unsuccessful. For this reason, we are stepping out of our comfort zone and asking you to kindly consider donating to our cause.

This living space could give James the opportunity to live with dignity for the time he has. With your help, we can make this dream become a reality. It would be truly life changing for James, and us. Whatever you can contribute will be so gratefully received.