Donator left no message.
£40 from Anonymous 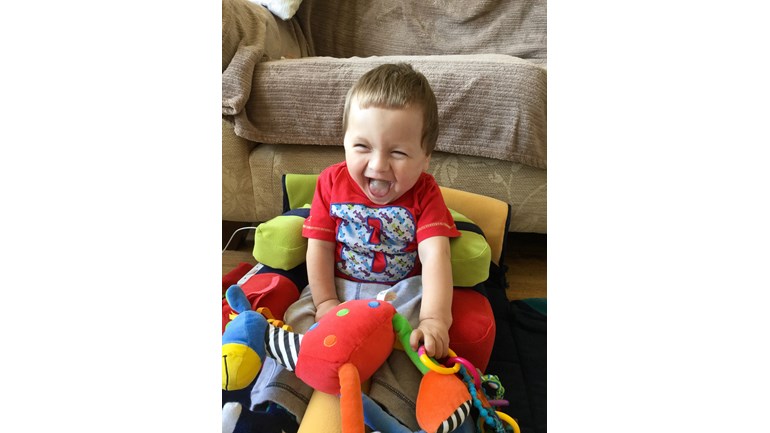 Thanks for taking the time to visit James' JustGiving page.

My story- When James was around 10 days old he began to have seizures & we were told that James had suffered 2 bleeds to the brain a grade 2 & a grade 3 & that he would have some form of disability when he was older, as you can imagine our world collapsed & it feel apart. At 4 weeks old James suffered 2 fractured femurs (yes 2 broken legs at 1 month) due to Metabolic Bone Disease of Prematurity, due to this James doesn't like his legs touching & refuses to stretch them out resulting in very tight hamstrings. At 6 weeks James came off the ventilator but had developed CLD (Chronic Lung Disease).

At 3 months James was rushed for emergency eye surgery for ROP as the blood vessels in his eyes were turning in which can cause blindness, resulting in James being severely visually impaired.

At 4 1/2 months old James was ready to come home on oxygen & NG feeding tube but sadly James' bowel twisted due to Malroation Vulvurus (a condition which had been affecting him since birth causing his bowel to continuously twist) after being rushed for 2 major abdominal surgeries in 80 hrs where is nearly died, James was left with 2 stomas & dependant on TPN & Lipids for 7 months, after 2 further operations James had his bowel rejoined but is left with SBS (Short Bowel Syndrome) meaning he may never get out of nappies due to his bowel movement & will always be at risk of malnutrition which could result in him going back on TPN which can cause liver failure.  Unfortunately after catching Rhino virus (Common cold virus) James was diagnosed with Broncheomalacia (floppy airways meaning the branches in his airways collapse), he narrowly avoided a Tracheostomy but after 1 year & 2 weeks James finally made it home from hospital.

Due to being born with Malrotation, Broncheomalacia & his prematurity James has been left with several condition's & Diagnosis-

The NSH is under cut backs & as a result we can't get the equipment or therapies James needs to reach his full potential.

- Private SALT lessons as James needs more input than is available for our area to help him learn to eat, drink & communicate

- Therapy courses such as Makaton to help communication with James

- Room adaptions, such as support in bathroom. James enjoys trying to stand up in the bath & as he enjoys a shower

- Specialist button pads for his new feeding button, protection belt & feeding tube cover to stop James from being able to wrap the wire around him

- Money towards funding a specialist trike which will fully support James

- The main thing we would like to apply for is help from Brain injury centres such a Brainwave, to help James' brain development, these intense course's & reviews & follow up appointments are very expensive but will help James hopefully one day learn to walk & be able to join in with his pears at school.

Thank you for thanking you time to read about James, he's is the most happiest & loving boy ever but is starting to get upset & frustrated as he wants to get moving but can't figure out how to do it, without intervention this might never happen