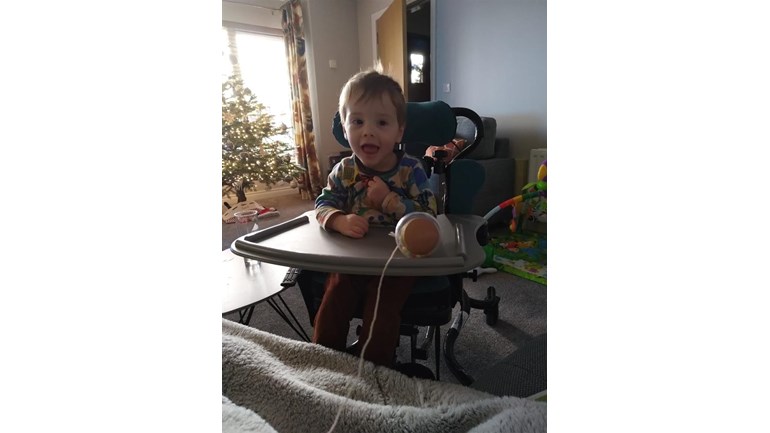 Jack was born on the 18th December 2017 - 8 weeks early weighing 3lb. We were made aware of how fortunate we were to have Jack delivered at that moment in time and after two months in neonatal he came home. We noticed that Jack was not behaving like other babies in the ward or at Baby Gym. His movements seemed to be outside of his control or erratic, he was stiff and in pain, he had difficulty feeding and swallowing and he was losing weight continuously.

After almost a yea of tests and visits to the hospital it was confirmed that Jack had Mixed 4 limb Cerebral Palsy. Mixed for Jack means his muscles are tight (spastic) and erratic (dystonic)..

The diagnosis helped Jack's medical team which consists of Occupational Therapist,  Physiotherapist, Neurologist, Feeding specialist/Speech and language therapist and the dietician to explain how his continued pain, sleeping and feeding difficulties were all the symptoms.

Jack is now 2, unable to crawl, sit, walk or talk. He hasn't developed the muscle tone or strength to support himself, to be mobile and interact physically. He needs support when feeding that allows him to control his swallow and reduce risk of choking. We do daily physio to encourage him to move and play with toys. Through it all he has been and is such a happy little boy. Who seems to have a permanent smile etched into his little face. He lives for fun and interaction.

We have recently watched a number of programmes such as Hospital and Save My Child which followed children through their SDR journey. The results are astounding and can totally transform a child's life. However this is only funded in limited situations which usually involves having a level of independence already. This surgery could take Jack to the level where he can walk, albeit with a walking frame, but the difference even that level of independence could make to a life is profound. It will give Jack more freedom to explore and give him opportunities he would have otherwise never had.

For anyone with an interest in the surgery see the links below:

We are in a race against time. As Jack gets older his neuroplasticity is lessened, this means the surgery will be less effective and his follow up therapy will be harder. Essentially the closer to 3 he has surgery the more effective it will be. The same goes for any additional therapies we can take Jack for.

Thank you for reading and for helping us to reach our goals.