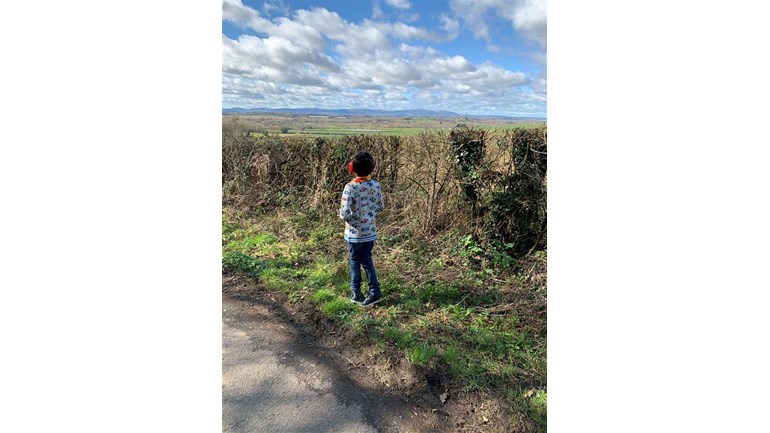 B is 11 years old. He is a handsome, clever, quirky boy who loves drawing, maps, learning about historical figures and classical music. He speaks with an American accent picked up from films and audiobooks, has a vast vocabulary and could happily spend half an hour telling you facts he has learned in his latest biography, but he is unable to talk about his feelings or have anything but the briefest conversation. He finds the everyday demands of daily life overwhelming and his anxiety is so high we’ve been told his baseline starting the day is like you feel when you are walking into an exam or an interview.

B also has sensory processing issues. Loud noises can be experienced as pain for him, he doesn’t know when he is hot/cold, hungry/thirsty, wet/dry and he finds lights, sounds and movement overstimulating. He isn’t fully aware of where he is in space so walks into walls and furniture, and can think someone is about to hit him when actually they are gesturing on the other side of the room.

B was diagnosed with severe autism aged two. We were essentially told to give up on him - that he wouldn’t ever learn to talk, be toilet trained, read and write or form meaningful relationships. We refused to accept that and worked tirelessly with him, repeating every step of each task over and over until he got it. Changing our behaviour and use of language to help him to learn to talk. Giving him life experiences. Teaching him to dress himself, to use utensils, to play, to read and write, and about the world around him.

He didn’t cope at all in school as the other children were so unpredictable, he is also demand avoidant so struggled to do anything that was asked of him. His anxiety was through the roof and it showed in his behaviour, he was in no state to learn. We removed him from school aged 6 to home educate, and academically he has thrived. He feels much safer at home, but the world is still a scary and confusing place for B and his anxieties are considerable. Two years ago we got to the point where he tried to take his own life, and when we tried to get help from the NHS we discovered that the door was closed. The combination of autism, home education, anxiety and communication difficulties meant that no services were willing to work with us.

Thankfully we found a private paediatrician who has worked with a lot of children with autism and understood our boy from the first appointment. She has done her very best to get him into a medication regime that works to reduce his baseline anxiety and enables him to cope with daily life. This doesn’t come cheap, as his medications are not prescribed by our GP and so are not subsidised by the NHS.

B has very limited danger awareness and has slept in a safety bed overnight since he was five years old. We’ve secured funding for a full psychological assessment to pick up on any further diagnoses, to recommend the therapies that will be best for him and to allow us to access the right support, but are unable to go as the assessment takes place over several days and is several hours away from us. He needs a portable safety bed to allow him to stay away from home safely, but they cost over £4000. This would also allow him to go on trips away such as on a specialist activity holiday with his Mum, or hopefully a carer in the future.

Leaving the house is difficult. B’s anxiety is worse outside as there are so many unknowns, and he fatigues easily from both sensory overload and hypermobility. He needs a suitable wheelchair buggy to allow us to move around safely outside when he’s struggling. We have a self funded wheelchair at the moment but he can easily slip out of it and put his hands in the wheels which is extremely dangerous.

B is very intelligent and has so much potential. We want him to be as independent as he can be, flourish in whatever field he chooses, and above all to be happy in himself, but he needs expensive equipment, speech therapy, occupational therapy, orthotics and other resources in order to get there, and these are just not available to him on the NHS. We would be so grateful for anything you feel that you could give.