Wish you all the best from Taiwan and merry christmas

All the best Harry

Donator left no message.
£392 from Anonymous

Donator left no message.
£25 from Olive

Donator left no message.
£1852 from Anonymous

One small step for Harry 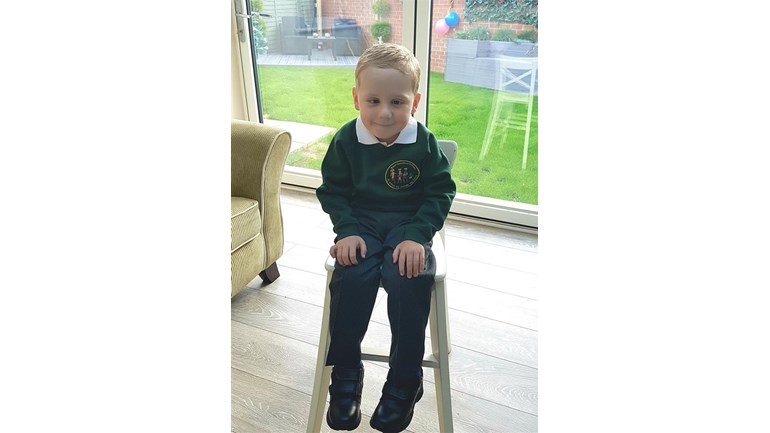 Thanks for taking the time to visit Harry’s JustGiving page.

This very special guy is our 7 year old son from Duston Northampton. This very charismatic, cheeky, intelligent boy is an absolute marvel. He is a fighter who fought his upmost to live surviving prematurity, life-saving bowel surgery at one day old and countless sepsis infections whilst in NICU. Unfortunately, Harry didn’t come out of this unscathed. He suffered from a brain injury called periventricular leukomalacia which has manifested as spastic diplegia cerebral palsy. This means that Harry’s movements are affected particularly his legs where he is unable to stand or walk unaided. This is a bit of a problem for an active little boy that adores rugby, strictly come dancing and P.E at school! Harry would love to take that first independent step, maybe succeed in scoring a try.

In October 2019, Harry underwent pioneering neurosurgery; selective dorsal rhizotomy surgery. This involved cutting rootlets in his spinal cord that were responsible for causing spasticity particularly in his legs. We are happy to report that Harry’s amazing surgeon; Mr Aquilina & his team managed to remove 100% of the spasticity! We are one step closer to help Harry to stand & walk unaided. Of course there is a but.... A BIG but..... We have to raise another £20,000 - £30,000 to pay for intensive physiotherapy as Harry's SDR would be completely inaffective without it. It is required that Harry receives physiotherapy (not available on the NHS) approx 3-4 times a week over a minimum of 3-4 years. This is at a cost of approximately £80 per hour! This does not include special equipment such as a trike etc... that would help give him more independence.

It would mean the world to Harry, his family & his friends to raise this money so that he can join in with playing with his siblings, his friends in the school playground, to take that first, precious step.

We really appreciate you taking your time and visiting Harry’s fundraising page.