Well done on the steps Beau! Lots of love x

Hope this goes some way to helping! Lots of love xx

£20 from Ade, Kat and Harriet Pippa

Donator left no message.
£855 from Anonymous

Donator left no message.
£30 from Emma

Donator left no message.
£10 from Nikki

Get up and go Beau Beau 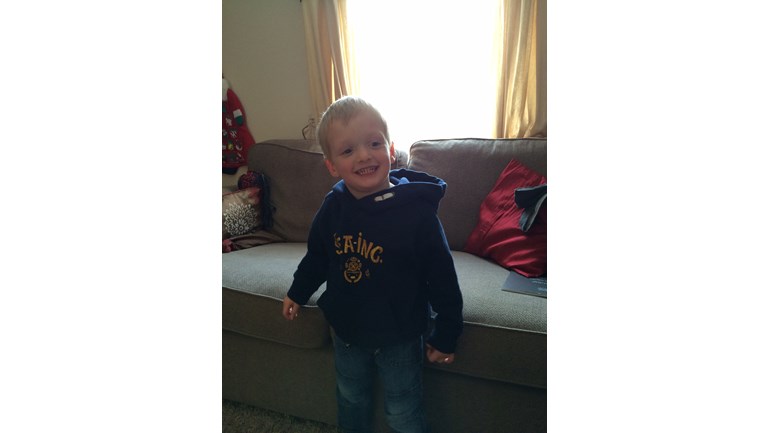 Beau is a bright bubbly 3 year old, his best friend is his twin brother Seth. They spend all their time together giggling playing tractors and getting into mischief. but as they get older Beau is beginning to notice he is not the same as his brother, as seth can walk, and Beau cannot.

My boys were born 14 weeks premature, spending the first four months in hospital, during this time Beau had 3 life saving surgical procedures on his bowel, the first one when he was only 7 days old.

The day we got to take them home was magical, but as a Mum I soon suspected something wasn't right. Seth was achieving the early milestones, which Beau could not.

We were told a lot of premature babies are delayed, and he would catch up, but as the milestones gap got bigger, the community paediatrician referred us to a specialist who confirmed my then 2 1/2 year old son had spastic diplegia cerebral palsy. He explained my son had 'dodgy legs', and his hands were also slightly effected.

Walking is something lots of us take for granted, but for Beau it is something that he working tremendously hard for, to help him on his way, we are raising funds for some lycra shorts and private physiotherapy.

By using a combination of Lycra and reinforcement panelling, to help re-align the legs and activate the inner core muscles needed to hold correct posture.

Beau would love nothing more than to run around the garden with his twin brother, so please help raise money for Beau to get up and go.

All donations are greatly appreciated, every little helps.

Donating through JustGiving is simple, fast and totally secure. Your details are safe with JustGiving – they’ll never sell them on or send unwanted emails. Once you donate, they’ll send your money directly to the charity. So it’s the most efficient way to donate – saving time and cutting costs for the charity