Just a little "way to go" to George from his Swedish friend Benjamin.

If you have already reached your target put this towards bedding! Sweet dreams George xx

Hope you have your new bed real soon George

Donator left no message.
£150 from simon,cheri,eithan,isabel

Hope this helps a bit. Lots of love xxxx

Hope you can get your new bed soon George ZzZzZz 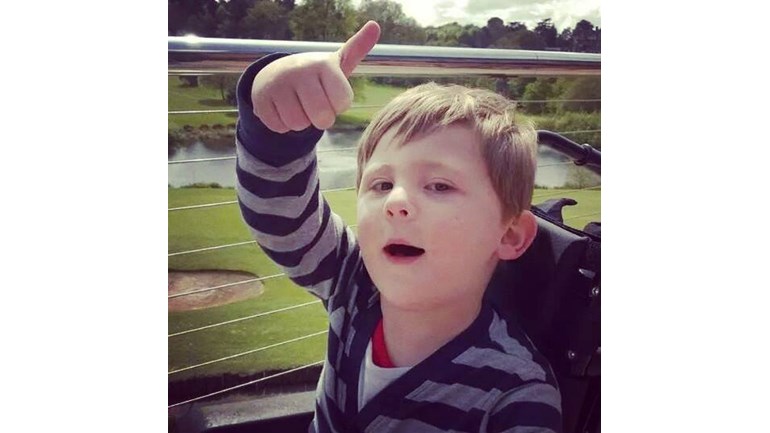 George was born on the 25/11/2010 after a very quick labour with no complications, when he first arrived he showed signs of respiratory distress and a paediatrician was called to take a look at him. On his initial consultation he decided he would like George to be taken to SCBU to be checked over. On a second opinion it was decided that they thought he was ok and I was taken down to the ward with ...him.

During the night/eve of his birth he was very unsettled and uninterested in his feed and my midwife became concerned at his low temperature of just 35 degrees, by the early hours of the next morning he was experiencing respiratory distress again which they referred to as 'grunting'. They put him into a temperature cot next to my bed to try and warm him up to no avail and At about 5 am he was taken down to SCBU.

On arrival at SCBU our baby boy took a turn for the worse and started fitting and had trouble maintaining normal things like his blood pressure and heart rate, straight away he was started on antibiotics as a precautionary measure while doctors started to do tests to find out what was wrong with him.

At 9am on 26th Nov a consultant and the nurse that had been taking care of George through the night came to my bedside on the ward to deliver the news no parent wants to hear... George had meningitis, at this point they did not know what strain of the disease he had as this would take another day to be confirmed. I contacted my partner and my mum who came to the hospital straight away. Meanwhile George had the fight of his life on his hands at not even 24 hours old. He was on CPAP to help his breathing, medicine to maintain his blood pressure and medicine to stop him from fitting among many other things. At this point no one could tell us if he would live or die.

The next few days were the hardest of our lives, not to mention having to leave the hospital after 3 days without my beautiful baby boy and Williams new little brother. But George was a little fighter and he was hanging on in there.

After a week George was making better progress than any or us could ever of imagined including the doctors, he became a little jaundice but this didn't need treating and he continued to do very well. He was kept in SCBU for a total of 22 days on a 21 day course of IV antibiotics and on 17th Dec we finally took our little fighter home.

Just in time for christmas it was the best present ever for us all especially William who had wanted a brother so long!!!

To look at our brave little man you would never of known he'd been so very poorly. That new years eve whilst watching Big Ben on the telly we said goodbye to what had been a terrifying year whilst looking at our beautiful boys thinking how lucky we were to have them.

Just 36 hours later on the morning of 2nd Jan 2011 I was giving George his morning feed when he became very unsettled and then became unwell with sickness and diahorrea he was crying uncontrollably and we became concerned as he was inconsolable.

We took him to our local hospital Kent & Canterbury where we were quickly referred to William Harvey Hospital in Ashford due to his medical history. On arrival to WHH were taken to a side room where George had his temperature taken, his blood pressure checked and his oxygen levels tested. we were told all of these things were fine. By this point George had worn himself out was refusing his feeds he went into a deep sleep and was very pale.

We were then discharged by the doctor who put it down to a feeding issue, Unconvinced I tried to discuss his previous meningitis with the doctor only to be told not to be a paranoid mother just because he had had it once at birth.

My mum had picked up William from the hospital during this time and kept him over night for us as she could tell we were still very concerned about George.

During the night George was still very unsettled and remained very pale his cry became a very pathetic whimper and he was still refusing his feeds, we were extremely concerned but also now felt we may be perceived as 'paranoid' parents. I sat up with George all through the night and at 9am put him in the car to go to my mums in Lenham to pick up William. During the car ride there George was still whimpering and appeared to be flinching at brightness and any noise. When i got to my mums I carried George in and handed him to my mum and cried.

Mum told me to ring the hospital back right away were i was told by a nurse to give him calpol... at 5 weeks old... and to ring back in an hour if no improvement. George was so distressed he wouldn't even open his mouth.

Not happy mum told me to ring the hospital again this time I spoke to a consultant Dr Colin Green he was immediately concerned given Georges history and told us to bring him straight in.

On arrival at the hospital George was given a lumbar puncture our worst fears were confirmed George had meningitis again.....

We were in total disbelief... it was a shock that this had happened once how was it happening twice?

George was started on IV antibiotics and was hooked up to life support once again.

During the night of the 2nd Jan George had 2 confirmed seizures and he became unable to maintain his body temperature, dropping down to just 33 degrees at 6am on the 3rd Jan.

Shortly after this George lost consciousness and we were sent down to MRI on returning from MRI I went down to the coffee shop whilst we awaited the results with my friend Georgia and my mum popped back to her work. We had just sat down to drink our coffee and my phone rang it was the ward Georges MRI results were back and they wanted to discuss them with me.

I walked back into his room and stood by the window.. Dr Green came in and gestured for me to sit down and took my hand and gave me the news that George had areas of brain damage and due to his altered state of consciousness (coma) he would need to be transferred to London by blue light ambulance.

In a mad panic I had to phone my partner and my mum, mum came with me in the ambulance and Jarno was to follow in the car i'll never forget hearing William sobbing as we where rushed off. My poor big brave boy.

When we arrived at London George was a very poorly boy and was being very closely monitored they kept a bed open for him on PICU for two nights as they thought he would need ventilating but our little fighter continued to breath for himself against the odds.

it was about 3 days before George regained consciousness we were over the moon but this time George hadn't been so lucky and it became apparent straight away there were some issues with his left side, he could not open his left eye or move his left side and he didn't appear to be able to hear either.

We stayed up in London for a month were he went through a series of tests to try and find out why this meningitis happened once let alone twice...

We still to this day have no answer to why or how this happened to George but we do believe that had he been treated quicker on the second episode he may of again made a full recovery as he did at birth. We do however feel extremely lucky that he is still with us after all he has been through. He is our little fighter :) and we all love him very much.
Because of Georges ongoing disabilities and needs we find ourselves needing a lot of equipment for him and unfortunately the NHS cannot fund everything we need Georges application for a specialist bed went to a panel and we were refused funding so now fundraising ourselves is our only option.