Spot the odd competition within the Ruthin Community (form sales 161)

I hope you get your dream, and Freya can live her life pain free and able to enjoy every second. Mx

I make this donation on behalf of Jacqueline Musselle-Wheeler

2018 is your year Freya! Can I bag the first dance next Christmas with your new legs?

In lieu of a gorgeous unicorn! Thank you Beth x 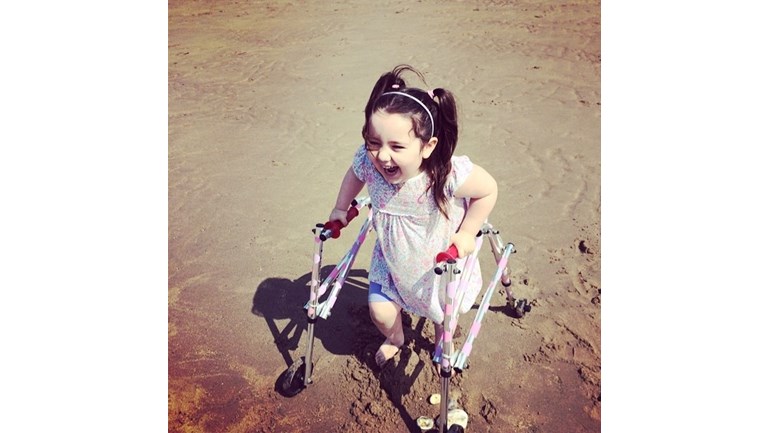 Thanks for taking the time to visit my JustGiving page.....

On the 10th August 2010 I was blessed with a beautiful baby daughter....my little Freya! She was born by forceps delivery at 42 weeks and weighed a healthy 8lb 13oz. I fell head over heels in love with her immediately!

As the weeks and months went by I fell more and more in love with her,but did become concerned that she was not reaching milestones that were expected. Not only that but when she was 10 months old I expressed my concerns about the positioning of her feet. I had picked up on the fact her feet would tilt inwards when she was weight bearing.She was referred to see a community pediatrician who told me not to be concerned and that she would grow out of it,"maybe we're just worrying about nothing" I thought. Months passed and this continued and only seemed to get worse,and there was still no sign of Freya learning to walk. Again,I was told not to be concerned and to leave it until she was 18 months old before looking into it any further. Again, months passed....

Freya was over 18 months old by this point and still nobody would take me seriously. My little girl couldn't walk and had noticeably deformed feet. I was told time after time by several medical professionals that there was nothing wrong with her. I would cry leaving appointments because I'd been made to feel like I was making a fuss about nothing,when mother's intuition told me something was wrong. Freya had tests,x-rays,MRI scans and everything came back normal.It was so frustrating not having answers.She was seen by a physiotherapist on a regular basis but other than that we were left to our own devices.

In April 2014 Freya was seen in Alder Hey Children's Hospital by a consultant neurologist who confirmed that I had been given incorrect information about Freya's MRI results,there WAS something to be seen on that scan! Finally,after fighting for years to get answers,at the age of 3 years and 8 months my beautiful girl was diagnosed with Spastic Diplegia Cerebral Palsy. I was absolutely heartbroken,it was not the diagnosis I had been expecting,but at the same time I was so relieved that I FINALLY had answers!! Cerebral Palsy is a form of brain damage caused during pregnancy,birth or soon after birth.

Freya is an extremely happy,intelligent,strong willed,well loved and chatty little girl who has a zest for life and gives everything her best. We're actually quite lucky that she has no other health complications as a result of her CP,other than the fact she has to wear glasses. She has no learning difficulties and attends a mainstream school and is thriving! She LOVES to learn and read! She does everything with a cheery disposition and a smile on her face....CP doesn't stop her giving her best to everything she does!

It's a real struggle for her to walk unaided and she has very poor balance and co-ordination. This means she falls over a lot and gets tired very quickly! She uses a walking frame and also has a wheelchair she uses for longer distances. She also wears AFO's on her legs which help to keep her stable. I have tried my hardest to ensure she already has a fantastic quality of life but as her Mum I feel she deserves more....

A few months after Freya's diagnosis I came across an article about a Doctor in St Louis who specializes in surgery specifically for the type of CP Freya has,and naturally it got me thinking. I did A LOT of research,spoke to other families who had been to St Louis and I was eager to know if Freya could possibly be suitable for this life changing surgery. I completed the applications and had to send off video evidence,have X-rays done,send copies of her MRI so the Doctor could assess her and within 8 days I received an e-mail with a decision....it was a YES!

She has been offered the chance to go to St Louis,Missouri USA to have Selective Dorsal Rhizotomy surgery which could potentially be life changing for her. I have also been advised that she may need to have a 2nd procedure to lengthen the muscles in her calves while we are there. The SDR surgery is on the base of the spine and severs the nerves that cause the spasticity so this would be permanently reduced. It would improve her balance,her posture,her confidence,her quality of life and would also reduce the amount of pain she suffers on a daily basis. Not only that...the doctor predicts she will be left able to WALK COMPLETELY INDEPENDENTLY in all environments. To see her do all the things most of us take for granted would be the best gift we could ever get....to see her walk,run and skip,jump in puddles,take her to a shoe shop and buy "normal" shoes,to ride a bike,to see her walk into school hand in hand with her friends rather than holding on to a walking frame and maybe one day throw those AFO's in the bin! She deserves this chance so much but unfortunately I can't get there without help. This is a big ask I know,but I have to try! If I could trade places with her I would in a heartbeat,but I can't. The best I can do is to try and make it better for her. Money raised will go towards surgery and medical costs,3 weeks of intensive therapy in St Louis following her surgery,accommodation,flights,living costs for the 5 weeks we'll spend in the US,new AFO's if needed,physic in her return home and any equipment she will need to aid her recovery and for her to continue her therapy at home. I would be beyond grateful of any donations to help me change my little girls life ❤️

Should we exceed the target amount(or if we do not raise enough funds,or if they cannot be used for any other reason) the funds raised will go to the general funds of Tree of Hope to assist other sick children .