from the collection tin in Franklands Village shop

From all at Turbocam UK 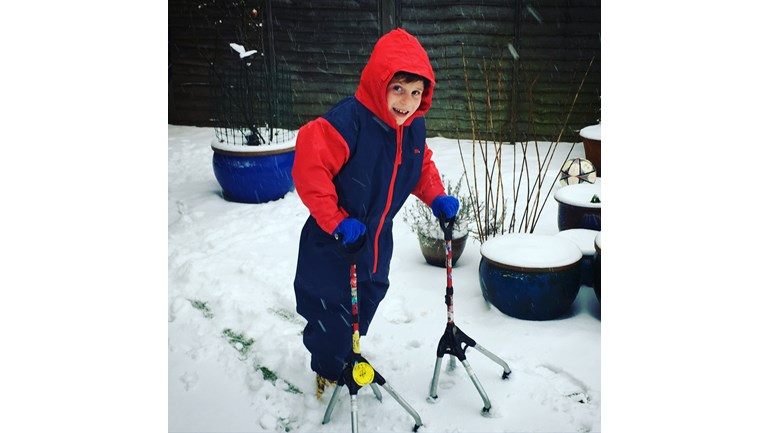 Thanks for taking the time to visit our Just Giving Page.

Oliver was born in January 2011. He was nearly 12 weeks early and weighed 2lbs 12 when he was born. As time went on we started to realise that he wasn't able to do things other children do and wasn't reaching his milestones.

In April 2012 Oliver was diagnosed with Spastic Diplegic Cerebral Palsy with complications in his upper limbs. Our world fell apart when the consultant told us he may never walk. At that time Oliver couldn't do anything, he would just lie on the floor watching the world go by around him.

In September 2014 we travelled to St Louis in Missouri for a life changing operation called SDR - Selective Dorsal Rhizotomy. It may sound a cliche but it really has changed not only Oliver's life but our entire family. He was always a happy, smiley little boy, but now at the age of 7, he attends a mainstream school, walks with sticks and is a confident, cheeky little chappy. Oliver still has to work really, really hard. He sees a private Physio, personal trainer,  swims twice weekly and is working with Drew Walcott at SDR Progression in Wales at least every other month, if not every month.  We have to pay for these from Oliver's tree of hope funds along with other medical equipment such as his wheelchair and Splints. He works so hard, far more than any 7 year old should have to do and instead of having fun during school holidays has to work and train hard just to be able to walk one day.

In February 2017 we once again travelled to St Louis for 4 weeks. Oliver needed to have his heel cords lengthened so that he could put his feet down flat on the floor rather than being on tiptoes. This was the next step for him, and although it was scary that he had to have another operation, it once again made a real difference... it was the icing on the cake! He's nearly there with his walking, he just needs that little bit of extra help. He needs to continue working hard but we know that he can do it... all of the time and effort he puts in to his training and everyday life will be worth it! He is currently using quad canes to walk, along with walking sticks and we know he has the ability to be able to walk independently one day. Please help us to give him the support he needs, and the funds to help to provide him with his Physio, sessions in Wales and personal training.

Thank you so much for all of the help and support you have given us for the last 6 years... we appreciate every single thing you have all done to support Oliver and Team Osborne.