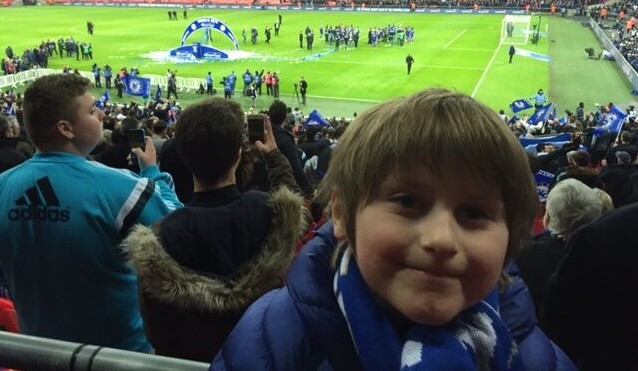 In celebration of World Cerebral Palsy Day, we’re delighted to bring you an update on eight-year-old Jude, who last year underwent SDR (selective dorsal rhizotomy) surgery at the Portland Hospital, thanks to the generosity of family, friends and well-wishers supported by Tree of Hope.

We’re delighted to report that, with the help of the London Orthotic Consultancy who worked closely with the Portland, Jude is now going from strength to strength and in particular is pursuing his true passion in life – football.

Jude, who was born prematurely, has been diagnosed with cerebral palsy from birth. Prior to surgery, his biggest ambition in life was to kick a football – so much so that his Dad, Tony, used to drive him 100 miles every week to attend special training sessions for children with the condition. After raising the £30,000 needed, Jude underwent successful surgery followed by a programme of physiotherapy and orthotic care. That combination has truly helped Jude achieve new goals and do what he loves best on the football field.

Now, Tony has set up a special football team for children with cerebral palsy in Staffordshire, which is going from strength to strength. “I started with just six children in the team,” he says, “but now we’ve got twenty. It’s a proper team.  The Portland Hospital sponsored a strip so the kids really feel they’re part of something.  And it means a huge amount not just to the children but their families. I had an email recently from one of the parents. She told me about the massive difference the team is making not just to her son but to the whole family. She said that being able to play football, to be a genuine part of a real team, is boosting his confidence every day. That means a huge amount to me because, of course, I can see it having exactly the same effect on Jude.”

Funnily enough, football is where the SDR journey all began for Jude, when a fellow parent involved in cerebral palsy football told Tony about SDR surgery. “We consulted Dr Aqulina at Great Ormond Street but it quickly became obvious that, whilst it was the right option for Jude, the only possibility of getting the surgery was to raise the funds ourselves and have it done at the Portland,” Tony explains. “With Tree of Hope’s support, we were able to raise the full amount and we will always be so grateful to everyone who donated.”

That was only the beginning of Jude’s journey, according to Tony. “We always knew that Jude would be likely to continue to need orthotic splints to support him after the surgery. But we were concerned about the limitations of splints provided on the NHS. Fortunately, the Portland signposted us directly to London Orthotics Consultancy. We met Jude’s orthotist, Alan, and the splints he manufactured have made a huge difference to Jude’s stability. These days he doesn’t have to wear them all the time, but they still support him and they’re helping to re-train his brain so that he can control his movement with more stability and confidence.”

Since the surgery, it’s been a whirlwind year for Jude. Not only is he an ambassador for Cerebral Palsy Sport England, he has also recently realised one of his dreams by meeting the manager and players at his beloved Chelsea FC. Not to mention regular boxing, circuit training and swimming sessions. “I want him to be as active as possible,” says Tony. “He loves sport anyway, it’s such a fantastic way to boost fitness and social skills. And for all the kids who are playing on the football team, it helps them to feel normal and accepted. We are absolutely delighted with Jude’s progress.  As he gets stronger and bigger we believe there’s room for even more improvement – ultimately we hope he will grow out of the splints that have helped him so much, and become as independent as possible.”