Every little helps.From one twin to another. Love and prayers

Our thoughts and prayers are with the family, wishing you the best!

Wishing you lots of luck

Evie we hope the operation went well! Wishing you a quick recovery x

I wish Evie every success with her treatment. Margaret (colleague of Maddie) 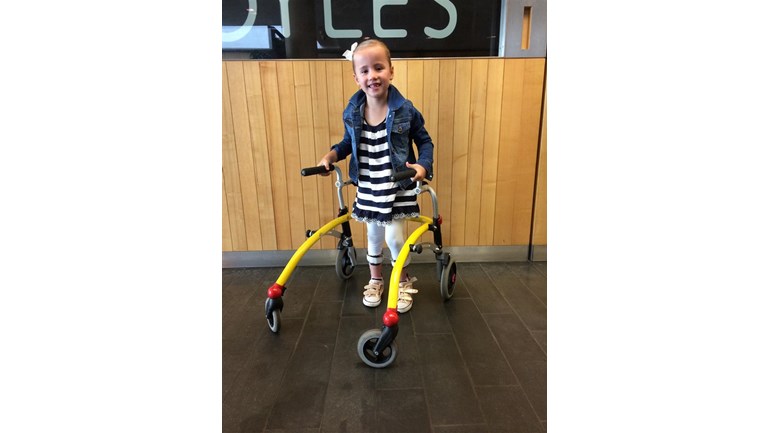 Evie is 6 years old and an identical twin; Evie and Emie were born prematurely at 32weeks. Both girls have Cerebral Palsy, Emie has Hemiplegia CP which effects one arm and one leg but is fully mobile, Evie has Diplegia CP which affects her legs.  She cannot stand or walk unaided and she uses a walker to help her. We have found out about an operation that could help Evie walk unaided, this is called SDR (Selective Dorsal Rhizotomy).  Evie was initially turned away from a London hospital but after seeking a second opinion Evie has been accepted at the Leeds General Infirmary hospital.  She has her operation date for this October, which we are very excited about but also extremely nervous.  To add to these mixed emotions we are left in limbo as we don't know for certain if this operation is going to be funded fully by the NHS as originally advised.  The operation comes with intense physiotherapy for 2 years plus ongoing physio for Evie for the rest of her life.  We are hoping to fund raise enough money to cover the operation and physiotherapy. If the NHS decide they will cover the cost of the operation the money raised will go towards Evie's ongoing intense physiotherapy, physio equipment, physio room and physio based activities. Any funds reached over the target will go to the Tree of Hope to assist other sick children.

Thank you so much for taking your time to read Evie's story and for taking the time to visit my JustGiving page.