I wish you well xx

Woodford Depot all dressed up last Thursday 14th December in Christmas regalia and collected a whopping £50 to help Evan and your family in your ongoing fight. Best wishes to all of you from Woodford

keep on doing the good work

Good Luck! Thinking of you all xxxx 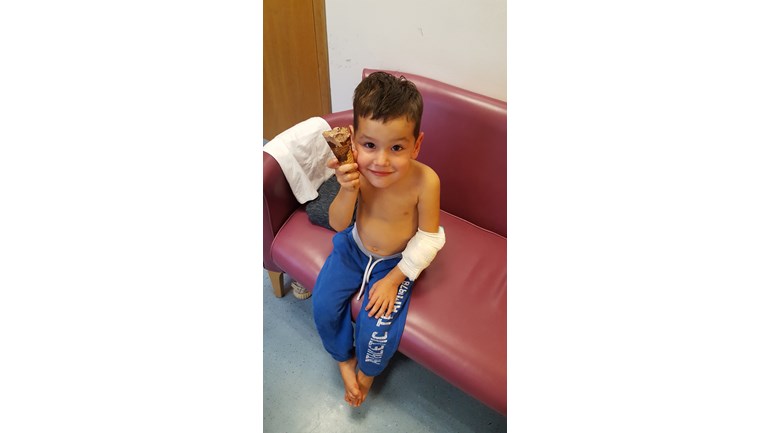 Evan's story begins in October. He began four days of not sleeping at all. Began being sick, and then on the morning of the 10th October, was unable to stand back up after falling out of bed. His legs just stopped working, despite his attempts. He cried - really cried. I panicked. Real fear. We took him to the hospital, and were sent out that morning.

In the evening of the 10th, he had become noticeably worse, pleading with mummy and daddy for things, telling me he had enough standing when he was laying down. My little boy was really bad and an ambulance crew was sent. They found his heart rate to be between 36 and 50 instead of a standard 100. They rushed him in and the following day he underwent an MRI. The news was devastating for us all. He had a brain tumour and was critically ill as a result - needing life saving operation that evening.

The operation was a success, giving me the best birthday present I have ever had. We were then told to prepare for the tumour removal operation the following week. After a 9.5 hour operation which was full of tears and worry, he came out. His recovery was one of the worst things I have ever witnessed, having had the back of his head opened up. The feeling of helplessness and fear. Again, some luck - the tumour was fully removed. We were expecting the results on the following Friday to show it was benign.

Unfortunately, this was not to be and we were given the news that Evan had a Medulloblastoma. He had brain cancer - an aggressive form with some horrifying statistics for children of his age. The NHS do not refer this type of cancer for proton therapy due to its aggressive nature we were told. The NHS do not have proton therapy in the UK. We expected the worst and started to look for a centre which could help us. During this time, many specialists confirmed that proton radiotherapy would be their advice - countries that have the treatment. The costs however have been staggering and varied.

We have been lucky to find a proton centre in Essen, Germany that is not just able to fit Evan in the timeframe he has been given but is the lowest priced option. However, that price may still be the one stumbling block.

This is just the first step of the battle - we know we have chemotherapy to come. Evan has been amazingly brave. Please help us make sure it was not in vain.

Please contact me for a form so we get additional 25% from HMRC if you are a UK tax payer. rorywestfold@hotmail.com

Also, you will save us an additional 5% (fee charged by justgiving) if you transfer to Tree of Hope directly, ref: Evan Westfold 2017