Donator left no message.
£70 from Taylor Made Uniforms

Donator left no message.
£56 from Anonymous 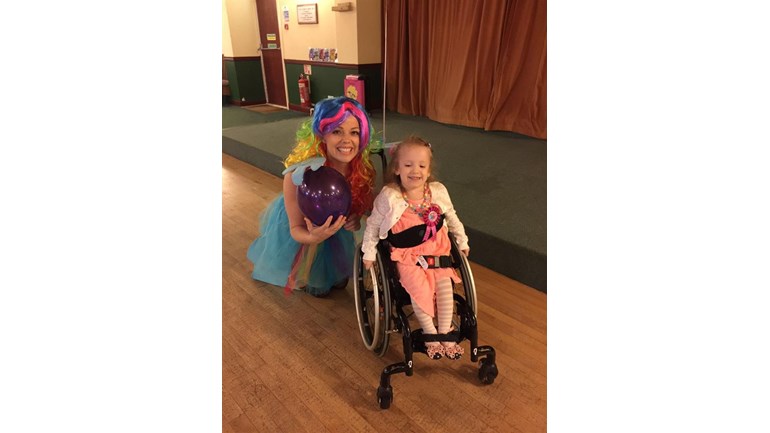 Emily was born at 29 weeks in march 2012 due to placental abruption. Emily spend many weeks in scbu and it was there we discovered on a routine ultrasound head scan that she had sustained brain damage. A further MRI confirmed she had bilateral periventricularleukamalacia it was worse on her left side. The future for Emily was unknown but it was likely that she would have some form of cerebral palsy along side her other prematurity related issues of reflux, sandifers syndrome, anaemia, metabolic bone disease and a week immune system.

In October 2012 it was confirmed that Emily had cerebral palsy affecting all four limbs. .

We then discovered Emily had an unsafe swallow with liquids, she had aspirated her feeds and this lead to bronchilitis and aspiration pneumonia. The first winter we spent every month in and out of hospital with her chest.

In April 2013 Emily started at the dame Vera Lynn trust school for parents. This is a school based on conductive education, we met other parents and children in the same situations. Emily at aged 15 months started to roll over front to back! Emily loves the social interaction and boy does she work hard there!

By now we realised that Emily would be needing extra equipment than children of a similar age and we knew that the NHS wouldn't always be able to cover this.

In November 2013 it was decided that Emily was still underweight and burning more calories eating than she was consuming. An NG tube was fitted and she is having high calorie milk to top her up. She is milk and soya intolerant so it took a while to get this right. She then progressed to a gastrostomy tube but made such good progress that this was removed in October 2015.

Fast forward to now, Emily is almost four and will be starting school in September. She attends mainstream nursery two days a week and a specialist provision two days a week which has made a huge difference to her. Using the wheelchair we purchased for her from fundraising money she is able to propel independently and wants to explore her surroundings.

We are looking to the future and know that we will need things that are ridiculously expensive. We previously fundraised for private treatment  for Emily at great ormond street which is how we ended up with a feeding tube and we are so grateful for the support we received from family, friends and strangers.

One of the things we were hoping to fundraise for was SDR surgery in America. However we had an appointment with a specialist at the Evelina Childrens hospital in London just before Christmas and he felt that SDR would not be suitable for Emily due to her fluctuation in tone. He also felt that she would not be an independent walker, which was difficult to hear.

With all this in mind we are hoping to fundraise over the next few years and get the ball rolling so we can make Emily's future a brighter one. We need to completely adapt our home and garden making it wheelchair accessible so Emily can be as independent as possible.

We are hoping to start with the garden paving and levelling it all off so she can enjoy being outside with her siblings. We last year purchased an inflatable hot tub for Emily to enjoy hydrotherapy in. We would like to look at something more substantial so she can enjoy this throughout the year.

Thank you to every person that has donated to Emily's fund, we cannot tell you how much we appreciate it.