Donator left no message.
£10 from From Julie x 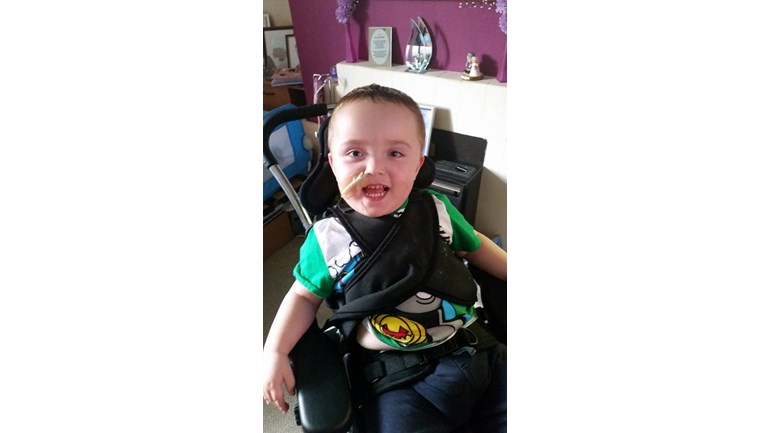 This is Dayton's story:


Dayton was born at 28 weeks on 26th September 2012 by emergency caesarean.

He was rushed to intensive care and lived there for just over 7 weeks, having problems with his oxygen levels. After a blood transfusion things seemed to be better and his Mum and Dad (Elaine & Jamie) were so excited when they finally took him home to his family on 15th November 2012.

Unfortunately, that wasn't the end of the story and a few days later it became apparent that Dayton was still having problems as he would stop breathing while he was having his bottle. The worst day was when Dayton went blue and floppy in his Mum’s arms. They rushed him to hospital only to be told it was a reflux issue.

But the worry continued with Dayton choking on food and milk.At 6 months Dayton was taken to see his consultant who asked some uncomfortable questions: Did Dayton smile yet? Did he coo or roll? Did he sit up or hold his bottle? His parents looked at each other as the realization dawned – he didn't do any of those things.

June arrived and as Dayton still showed no real progress other than the breakthrough of his first beautiful smile, his Mum made an appointment with the paediatrician. The same questions were asked but the answer remained the same – Dayton was not developing as he should. The follow up appointment on 9th July was a day his family will never forget.

His Mum, Dad and grandparents were called into the paediatrician’s room where they were finally given some answers. Dayton had cerebral palsy. His family were all in tears. All of them except his Dad, Jamie. With his usual optimism Jamie told everyone in the room not to worry and that he would fund raise and get the money for everything his son needed to have the life he deserved.

After a brain scan Dayton was diagnosed with periventricular leukomalacia (pvl) of the brain. This is where part of the brain dies and forms cysts causing cerebral palsy.One of the symptoms of his condition means that Dayton has spasms all the time. He has treatment for this but it only lessens the symptoms a little. The spasms can be that aggressive that he can go from being held in his Mum’s arms to landing on the floor.As his family have found out more about Dayton’s condition, they have to face the reality that he may never walk.

Dayton has started intensive physiotherapy daily and specialist physiotherapy weekly with a physiotherapist. He also sees a portage worker who uses sensory equipment. Dayton loves this and shows such progress with it but his use is only sporadic as the equipment is shared with other children.

Recently Dayton has been having trouble feeding and was told to have a video x-ray to find out what was going on, the news wasn't good most of Dayton's food and liquids was going to his lungs.

Dayton now has a PEG tube fitted into his belly and will be fed through a tube for the rest of his life.

Our aim: We have a target of 3 years to raise £15,000 for Dayton. This is how much it will cost to set up a full sensory room for Dayton at home, to buy physiotherapy equipment to help Dayton with his muscle tone and a specialist hot tub also for his muscle tone which he can use in his own environment.

This will make so much difference to the first few years of Dayton’s life. We really need your help with this – any fundraising activities you can do to help Dayton and his family or any donations you can make, however small, will really help.

Jamie knew straight away in that consultant’s room that he could do this. And with your help, he can.