Donator left no message.
£15 from Anonymous

Ive just seen your story on saints and sinners and I was truely touched by your story.

I hope Daniel is enjoying his own tracker. This equipment seems to be a fantastic communication device. What a delightful little boy, and he is so lucky to have such wonderful parents.

Just seen your story on the BBC and was very touched . A very worthy cause. Good luck to Daniel for the future

Just seen your familys story on bbc1 it really touched me as i support people with learning and physical disabilities. Wanted to help a little :) take care. 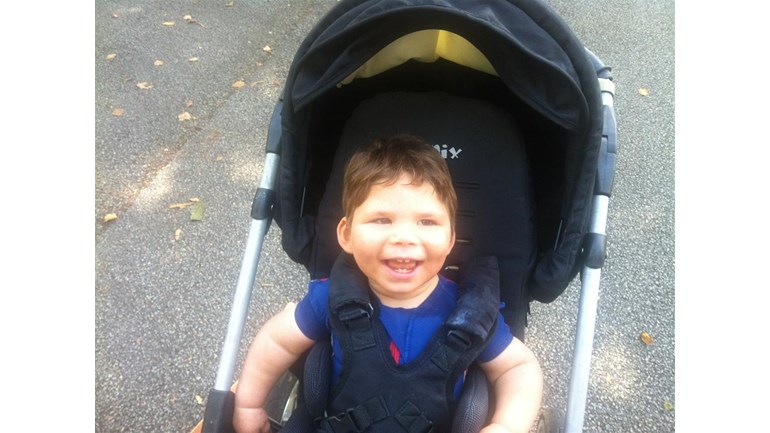 Eye gaze technology will track Daniel’s eye movements enabling him to interact with the computer and provide a gateway to play, communicate and control the environment. This is fairly new technology which the NHS and charities will not fund.

For those who don’t know Daniel, Daniel is a miracle. Daniel was born blue and floppy from oxygen deprivation at birth. Daniel was ventilated and was rushed to Norfolk and Norwich intensive care for cooling treatment to help prevent further brain damage. Daniel had an MRI scan when he was 2 weeks old which show profound brain damage. We were told it was highly unlikely he would survive and if he did he wasn’t expected to live beyond the age of 2.

Daniel is now 2.5 years old and loves the beach, swimming, eating ice cream and chocolate, visiting aquariums and parks amongst many other things.

As a result of his birth, Daniel has severe cerebral palsy which affects both his arms and legs making it difficult for him to control them. Daniel also has severe epilepsy.

Daniel currently communicates through different sounding cries and it can be difficult to determine what he wants.

Daniel’s health professionals recognise that this eye gaze computer system will have numerous benefits for Daniel. It will allow Daniel to play games to get a sense of cause and effect, and be able to express choice.

With the wide range of software packages available the system can advance as Daniel develops and will be useful through his teens and into adulthood. Packages available range from educational games, communication using symbols and controlling the home environment e.g. switch on a light, heating etc

Thank you for taking the time to read Daniel’s page and any donation however small would be gratefully appreciated.