hope you get what you need daisy xxxx

Such a beautiful girl! Let's get you your chair Daisy!! Xx 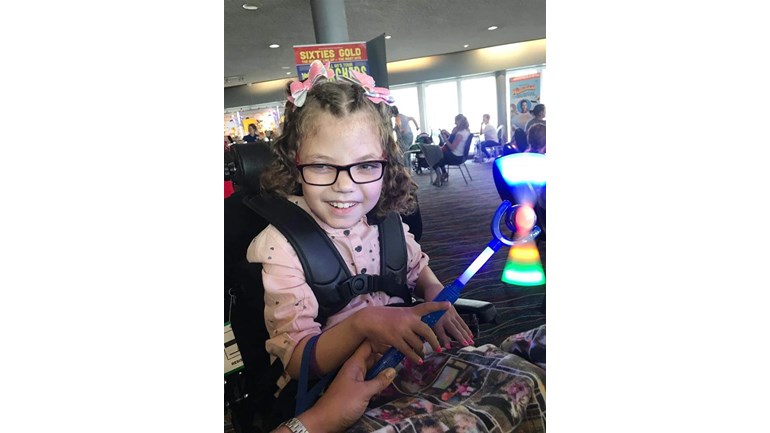 My name is Daisy May and I am eight years old.  I was born 12 weeks prematurely and suffered a massive Brain Haemorrhage when I was just 24 hours old.  Which led me to have Quadriplegia Cerebral Palsy, Hydrocephalus, seizures and I am severley delayed in my development.

I will give you some background as to what happened in my first few months of life.

I spent most of the first year I was born in and out of hospital, the first four months were in Neonatal Intensive Care Unit as I was so small and my body was not prepared for the world.  Eventually I grew stronger and was allowed home but not for long.

After seven days with my mummy and daddy I became very poorly, I was rushed to hospital and put on a life support machine and transferred to Kings College Hospital in London. This is where I would spend the next five months of my life, I had contracted Ecoli Meningitis in my head, bowel and blood.  I had to have several operations on my brain to remove the horrible disease that was taking over my whole body, I also had some of my bowel removed and had many blood transfusions and was given lots and lots of medication to help me fight this.

I was very poorly and my Mummy and Daddy were told I had a 5% chance of survival but I kept fighting and fighting with my family by my side I eventually made it, just.  But it would take over me again for the second time! After all this fighting, meningitis decided to take over my body again and I went through the same as I did the first five months of being at Kings College Hospital but again I fought it and won.

But it came at a cost I developed further brain damage due to the meningitis, I cannot sit, crawl or walk unaided, I am fed via a tube in my stomach, this is where all my medication goes to, I also suffer from four types of seizures and have an implant in my chest that helps me try to control my seizures, but as you can see from my picture I am a very happy little girl, always smiling and would like to try and succeed in anything I can.

But I need some help with that. This is why my Mummy and Daddy have decided to raise funds for me to help provide me with much needed seating equipment/electric wheelchair and Physiotherapy as the NHS do not cover the funding for these things.

I will have very happy days where I can laugh and watch my favourite programs on my iPad but also have very exhausting days where I don’t want to do anything but rest.

If you were to donate to my page you would be making a big difference to my life and hopefully others along with it.