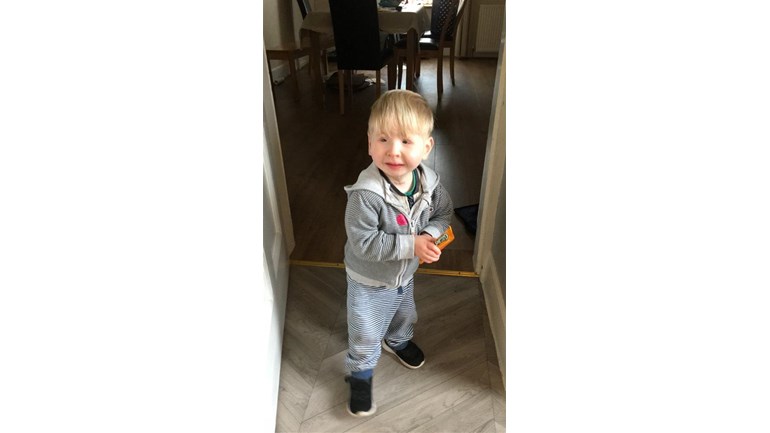 Callum was born in Elgin in October 2016. Unable to maintain his own airway he was immediately airlifted to the Royal Hospital for Sick Children over 200 miles away in Glasgow.

They found that the breathing issues were caused by Pierre Robin Sequence, a condition typified by a cleft palate and small lower jaw. These coupled with a normal size tongue meant that Callum’s airway was blocked by his tongue rolling back as it had nowhere else to go and no roof on his mouth to stop it from rolling all the way back. At less than 2 days old he had an operation to fit him with a tracheostomy. The tracheostomy created a safe airway for Callum but meant that he could never be left on his own and required specialist one-to-one care.

His anatomy meant he was unable to feed properly so he was also given a nasogastric feeding tube. It also became apparent that he had an unsafe swallow and had developed severe reflux. As a result, he has always struggled to gain weight and now, at 2 and a half years old, weighs the same as most 9-months old.

In August 2017 he had an operation to repair his cleft palate, his swallow was assessed as safe in April 2018, histracheostomy was removed in August 18 and his tracheostomy hole was closed through surgery in March 2018.

Whilst he has made amazing progress in most areas his feeding has always been a struggle. Progress with eating has been extremely slow and he’s still unable to take in the amounts he requires to grow and thrive.

Unfortunately, the NHS don’t provide any assistance with weaning children off their NG Tubes. We have however found an organisation called No Tube who specialise in this and are based in Austria. They assist children who either have a feeding tube or have been tube fed in the past to learn how to eat consistently. This is something that would benefit Callum greatly and potentially be life changing. We have been in touch with them and they have said they would accept Callum onto one of their Eating School’s; a 2-week intensive course in Austria with online follow-up for a few months afterwards.

We would be so incredibly grateful for your support to help us give Callum this life changing opportunity.