Sending all my strenght & my best wishes to the boys & all in the Haddcok family.

£50 from Fred and Stella Davies

Hope it all goes well for you and the boys. Lots of love, Colette & Leo xx

I wish you all the very best with your fund raising and I will keep your beautiful boy's in my prayers from a friend of Jacqueline's 😘🤗.

Such lovely boys. Sincerely hope you reach your target XX

Funds for Bobby and Ryan's needs 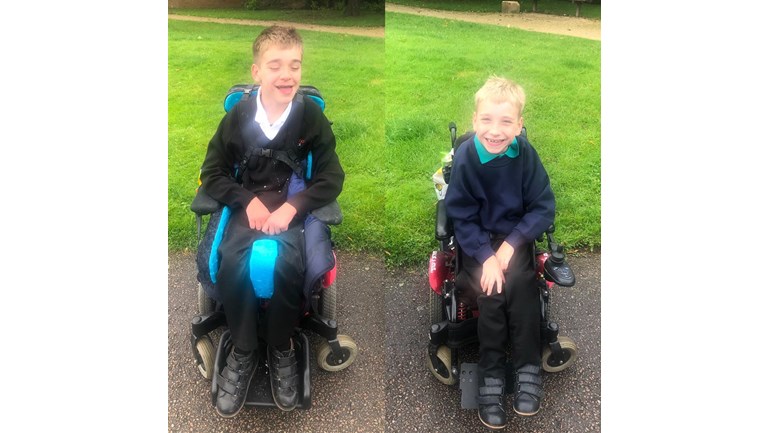 Bobby and Ryan were born 2 months premature in 2004 (bobby) and 2009 (Ryan). Due to complications at birth and immediately after and their prematurity they suffered brain damage called bilateral periventricular leukomalacia. This is when blood supply is cut off and causes white matter damage. The periventricular area deals with processing of signals and has cause spastic quadraplegic cerebral palsy. Bobby is also on the blind register due to cortical blindness, meaning that the signals from his eyes don't get to the right part of the brain to process the information so his vision isn't functional.

Bobby can crawl in a cross between commando style and a kind of bunny hip pulling both legs with him at the same time with little Independent movement from his legs, he can sit in 'w' sitting where he sits between his ankles while in a kneeling position. He has started to help assist with his transfers in and out of his wheelchair, and on and off a bench, he can weight bare and talk a few supported steps with help positioning his feet but due to having low tone in his trunk and poor head control he is unlikely to progess further than assisting in transfers and maybe take steps with the help of a k walker but this is a long way off yet

Ryan is incredibly tight in his legs and it restricts his movement and ability to progress further with physio. He can't sit or stand but crawls using his arm to pull himself along on his tummy he has very little movement in his legs and when he is doing activities they tighten up even more. His legs pull inwards and tend to cross at the knees making it difficult to change him and causes pain when we try to separate his legs to change and put trousers on etc. This has also caused some problems with his hip development and he is due to have hip surgery once he is recovered for sdr surgery

1) Ryan needs surgery to help the spasticity in his legs, this is called selective dorsal rhyzotomy (sdr for short) Ryan doesn’t fit the strict criteria for nhs funding for this surgery, so we have to self fund the operation. This isn’t paying to go private for the surgery, we are just paying the amount the nhs would pay. The surgery is on part of his spine and cuts some of the nerves so will stop the signals causing his muscles to be so tight and stop them from spasming so much so will make life in general much easier and cause less pain and restrictions for him. His physio believes that once his muscles loosen a little he will be in a similar position to where bobby is now and will enable him to work on progressing further as he has good trunk control and head control so has a good chance of working towards walking with a k walker or other aids. The sdr when we originally looked into surgery was going to cost around £12,000, we have since been accepted at alder hey hospital where the surgery costs £16,000 as it has a more intense post op programme with a much longer inpatient stay compared to the original hospital we were referred to. Our physio, orthopaedic consultant and ourselves feel that Ryan would benefit most from surgery at alder hey so that he can get the best from his surgery.

2) Sdr post op requires at least 12 months of intensive physio and hydrotherapy which isn’t provided by the nhs either so this reflects in our target amount. Most patients benefit from a couple of years specialist therapies to be able to get the best from the surgery

3) bobby is in need of therapies too as he is growing st an alarming rate his current treatment for spasticity isn’t working as well as it used to. Partly because he’s growing so quick and partly because over time the treatments he has start to have less effect as his body becomes immune. Bobby would benefit from more hydrotherapy as it enables him to move freely in the water and stretch his limbs. He currently has physio swim at school and the days he does he is much easier to move and care for so regular hydrotherapy would really benefit him.

For both boys the funds will give them treatment and equipment which will be life changing for them and improve their quality of life. Our main priority is to book the sdr surgery and to price up the therapies that both boys need and any equipment they may need to help carry on therapy and treatment at home between appointments.

Both boys have the ability to melt everybody's heart that they meet and they just need a chance to be able to develop to their full potential.

Should we exceed the target amount (or if we do not raise enough funds, or they cannot be used for any other reason) the funds raised will go to the general funds of Tree of Hope to assist other sick children