With love from the T.U.T.

Well done Blu for all your progress you have made so far.

Laura & Damien all the best for the 9th September, I hope you have great night and raise lots of money!! Blu all of us at KCE FM Limited are right behind you!! 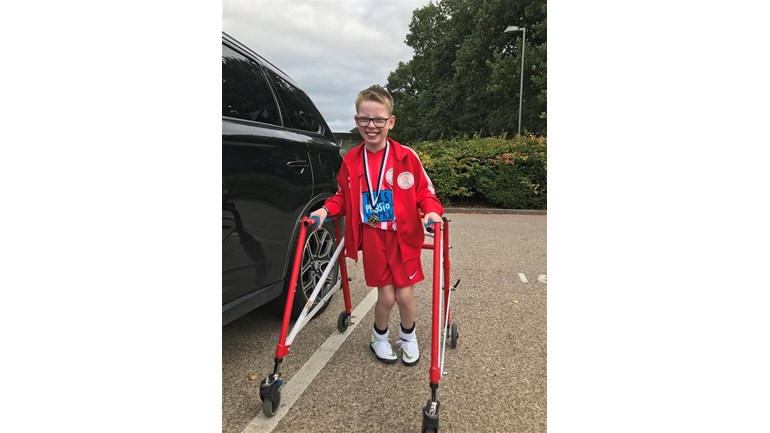 We are (Laura & Damien) the parents of Blu Hill, who was born prematurely at 32 weeks. He was kept in hospital at the NICU but his fighting spirit enabled him to grow stronger and stronger until he was allowed to come home. As time went by with Blu at home, we noticed that his development was not as it should be and that there were many things he should have been doing that he wasn’t. After a lot of doctors and hospital appointments, tests and consultations we were told that Blu had Cerebral Palsy. The doctors told us that the brain damage Blu had suffered would restrict him from doing most things other children take for granted and we were left with a lot of uncertainty for the future.

Since his diagnosis Blu has carried on his fight in life and is an extremely happy little boy who has achieved most of what we were told by doctors that he would never be able to do of which we are so proud of. He will never be cured of Cerebral Palsy but he has not let it hold him back, even though he is unable to walk and finds many things difficult due to his condition. He needs constant support when he is out of his wheelchair when trying to stand, as he is very unstable on his feet due to being on tip toes. He can walk slightly with his kaye walker but tires very easily. He now attends mainstream nursery and goes to many groups as he is such a sociable little boy. His determination, fight and personality are amazing and there is not much he won't try even if he is unable to do it he will keep trying. His main passion is music and his guitars he absolutely loves them, and is our little rock star.

We are always trying to improve Blu's life and this involves various equipment and intense physiotherapy. This is not always available on the NHS and can be costly. We have also found out about a life changing operation for children called Selective Dorsal Rhizotomy which has had amazing results. We have been told Blu is a suitable candidate for this and will be under going the operation by the end of this year (2013) in Bristol.The operation which would in the long run, take all of the pain and stiffness away and hopefully, allow him to go on and walk more comfortably.

We have set up 'Blus Nu Shoes' to help start to fund equipment and of course the on going physio therapy for after the operation. We are hoping to raise £20,000 which will pay for the aftercare along with orthotics and equipment Blu will need.

Blu is a wonderful, amazing child with such a fight for life it is quite unbelievable considering the prognosis we were given for his future how far he has come. He has, so far, defied all odds and we hope that with your help, he can continue to do this and continue to improve the way he lives his life. Every penny donated will go towards helping Blu and making a difference to his day to day wellbeing and allow us to concentrate on helping him on his journey. He is so deserving of any help that you are able to give and we are so grateful for anything you are able to donate, and we know Blu will be too.