Congrats all! Love the Surtees's xxxxx

Have a great time ladies. We are all so proud of you. 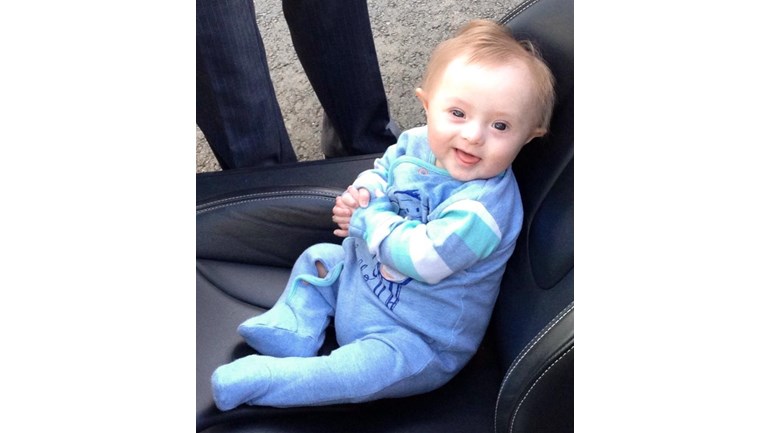 On September 29th 2013 my second son Archie was born weighing 8lb 5oz. When he arrived he came with something a little extra, an extra chromosome. We weren’t aware that Archie had Down’s syndrome so it came as a huge shock to us all when it was confirmed that he had the medical condition.

The following few weeks were an emotional rollercoaster when Archie had to endure several tests to see if he had any further health conditions as a result of the Down’s syndrome. At one day old he had his first ECG (heart test) and to follow were multiple blood tests, hearing and sight tests, a scan on his heart as well as physical tests to check his mobility. It became the norm for us to see our little boy covered in wires or being poked by needles. As new parents this was heart breaking for us, however Archie remained a brave little boy and it was clear to us he was stronger than we thought.

Luckily Archie’s tests revealed that so far he has no additional medical conditions, but we were told that we would be inundated with appointments and tests for Archie to attend for the rest of his life.

We soon realised after several weeks that often people stereotype children with Down’s syndrome, but Archie showed us that he could do just the same as any other baby his age when he first rolled over at 9 weeks old! He began to hit developmental milestones for children of his age such as holding his head up, rolling from his back to the front (and the opposite way too), bearing weight on his legs, cooing, and even recently even saying his first word, “mama”.

After attending several hospital appointments we had a large collection of leaflets with information about Down’s syndrome and what the future could hold (usually with a negative slant). This was very upsetting to read considering we were still dealing with the fact that our baby had a life long medical condition. We hadn’t been given any information on support outside of the hospital for Archie. All we were told about was a support group for parents, but I wanted to be involved in something that was going to be of benefit to Archie and which would also include my eldest son Zachary, whom Archie adores.

During Archie’s early morning first feed of the day I often think about various things that are on my mind, and it was on one such morning that I decided that I wanted to put together a group that was going to promote development in children with Down’s syndrome whilst also providing a fun and relaxed atmosphere where children and parents can meet each other. I also thought about how important it is for siblings to be included and be able to meet other families of children with Down’s syndrome. After a lot of thought and planning I have decided that I want the group to be focused around sensory equipment, fun toys, equipment that will support children who have varied development needs such as supportive seating and mobility equipment, musical instruments, and other activities that will support the overall wellbeing and development of the children. I am a huge believer in early intervention and giving children every opportunity to succeed, so I’d like to think that something such as a specialised stay and play group would be of huge benefit to many children with Down’s syndrome.

It is normal for people (even those in the medical profession) to look at a child with Down’s syndrome and say that they will hit milestones slowly, but with stimulation and support all children with Down’s syndrome could make a stand and hit those milestones much sooner. And even if they do sometimes fall short they would have experienced a lot of fun in a loving environment in the process.

Archie is a very brave, social and happy baby who is always smiling which is what inspired me to call  the stay and play Archie’s smile and want other children who attend to have a smile on their faces after taking part in various activities from the group. The whole family are very proud of Archie and the group is in honour of him.

When Coventry ladies round table approached me and said they wanted to help I was so grateful and pleased that they wanted to support the group so a huge thank you to all the fab ladies who are taking part in the 3 peak "S" challenge.

So please help us to support children in the local area and give a little extra, because after all these children have something extra to give to give to us, an extra chromosome.