It was lovely to meet you yesterday Lana with your Mummy. Wishing you good health and happiness always.

Well done Brian Warner on your fantastic achievement at iron man Austria all for this beautiful little girl, Lana xx

Get well soon little one xx

Sending love and hugs to Lana and her family on this difficult journey. Donation made in sponsorship of Brian Warners Ironman xx

£20 from Debi and Dan Smith

With love from a friend of Rachel's.

Sending love and prayers your way Lana. From Class I (Sienna's class at St Mary's) xx

Dear Zoe and Andrew, A small donation towards the fund. Hope you are well. 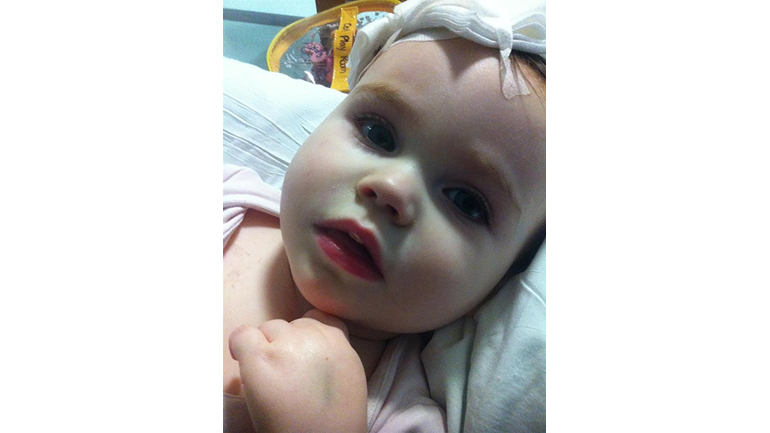 My name is Lana and I desperately need your help. I’m just a little girl with a pretty little name fighting a horrible thing with a big, scary name.

After feeling very poorly for a couple of months, some very clever men in funny clothes and hats had to deliver the news that broke Mummy and Daddy’s hearts - that I have a brain tumour. They couldn’t be sure what kind of tumour it was a first, but they knew it was the size of a tangerine and it was growing in and around my brain stem, at the same time blocking my fourth ventricle (that’s clever speak for a brain plug hole), and causing hydrocephalus (clever speak for water on the brain).

And so, three weeks ago those clever men operated on me to drain that water and save my life. And then, the very next week those same very clever men (called Neurosurgeons) spent 14-hours removing as much of the tumour as they could.

After so much bad news, Mummy and Daddy were at last given a glimmer of hope. The neurosurgeons had managed to remove around 98% of the tumour and, after looking at it a lot under a very big microscope, they were able to confirm it’s called an ependymoma. To be precise, the Oncologists (a different type of clever people who seem to prefer suits to funny clothes) told Mummy and Daddy that it’s somewhere between a sub-ependymoma and an ependymoma.

Well, whatever it’s called, it’s not a pretty name like Lana, and Mummy and Daddy say little girls should be made of sugar and spice and all things nice, and not nasty, ugly brain tumours!

Four weeks have now passed since the operation and I’m recovering slowly and steadily. I’m back to bottom shuffling again and have good strength and excellent control and balance, right down to my fine motor skills. I’m also smiling and laughing and just starting to pull some of those silly faces that Mummy and Daddy find so adorable. But it’s not all great news right now. I can’t swallow, so I’m having yukky space food squeezed down a tube through my nose and into my tummy. And my left eye’s gone a bit wonky, too, so I look a bit funny and everyone seems a bit wobbly to me.

My future looks a little wobbly right now too. The outlook has improved thanks to the neurosurgeons, but to give me a real fighting chance Mummy and Daddy tell me we'll all need to go to a faraway land called The United States of America so I can have something called Proton Therapy.

It all sounds like a fairy tale to me, and I don’t really understand any of it – I am only 16-months old, after all! But the little I do understand is that I’d need to live in the US for around three months, during which time I’d have to go into hospital daily so that a big laser-type thingy can try to blast away the remnants of my tumour. This laser-thingy’s supposed to be a lot safer and better for me than chemotherapy or traditional radiotherapy, and I guess that’s all I need to know; well, that and the fact that my Mummy and Daddy know it’s the very best chance a little girl like me has to beat a big ugly disease like this.

This is the biggest fight anyone can ever have in life. I might look impossibly small to fight against such a nasty, devious, underhand enemy, but I’m clever and I’m strong and I’ll fight it tooth and nail, you just watch me! I’ll fight and I’ll fight and I’ll fight with all my tiny might. And I won’t have to fight it alone. Mummy and Daddy and my big sister Ophelia will fight alongside me with every ounce of their being. But they might need help too. They’d never want to have to ask anything of anyone in life, but they now find themselves with no choice. This has already been a terrible burden on our happy little family these past three-and-a-bit weeks and there’s still a long and extremely challenging road ahead.

If I am accepted for Proton Therapy, the NHS will foot the hefty bill for my laser-blasting treatment and for Mummy and Daddy’s flights, but they won’t pay for my big sister Ophelia to be there to hold my hand. Neither will they be able to help with the cost of nursing care upon our return or any possible future treatment.

Mummy, Daddy, Ophelia and I would like to thank you from the bottom of our hearts. We’re just an ordinary family, just like yours, full of happiness and love. But we’re faced with an extraordinary fight. With you by our sides, we know we’re heading into this struggle with an indomitable army beside us. Any help you might be able to provide, no matter how small or seemingly insignificant, will make all the difference and will be remembered for the rest of our lives.