And finally.the mission is complete!Having arrived at base camp in Spitsbergen to minus 25 degrees and howling snow on Sunday 3rd April -we then got stuck in Longyearbyen until Friday 8th.Whilst Prince Harry was at our North Pole camp with the ˜Walking with the Wounded” soldiers, we were with his plane in Svalbard. As the weather started clearing on Tuesday, so the ice runway at the Pole cracked (apparently due to the sizable closeness of the large full moon the previous week which had disturbed the worlds oceanic flow and had put additional pressure on the Arctic ocean cap). The Russian Military worked overnight to create a new runway and we finally arrived at the site of our North Pole Marathon very early in the morning of Friday 8th April (circa 7am).In fact it’s probable that we only got on that first flight out through the influence of our organiser Richard Donovan as the queue for polar trekkers waiting on the island of Svalbard was nowsizable and the fact that the world’s media had turned their attention to our young prince who was stuck on the ice awaiting his / our plane well actually plane is an exageration; it was a tube with two engines with us strapped in !!

The marathon started at 22.00 that night and was absolutely brutal! I am wearing a blue jacket, yellow vest and the number 21. By now the temperature had dropped to minus 32 degrees and although beautifully bright and sunny, the storms that had passed through the previous days had left the course covered in really powdery snow so it became exceedingly difficult to get a grip underfoot. As the temperature dropped some parts of the course resembled a skating rink with the top end of the lap (there were 14 laps around the Pole) appearing to be a thin covering of ice over the blue ocean which creaked and cracked as you ran across it and sent ˜pinging” noises like a sonar to the ice and snow features surrounding us. Although I didn’t really take it all in at the time, it was abjectively beautiful the bright sun reflecting off the white blue ocean turning some of the snow hills to lime green if only my legs would have appreciated it!
img src=”http://www.treeofhope.org.uk/wp-content/uploads/images/jonsmith415.jpg” alt=”” width=”294″ height=”233″ />

We couldn’t carry any refreshments as they would freeze so I planned to come into the medical / refreshment tent every other lap to make sure that I was refueled, but this changed as I got to lap 8 and various body parts started to sizably ache, largely due to the stumbling, falling and enormous effort required just to run through some of the hillier areas of the snow on the course that, in places, meant we were running virtually up to our knees in the stuff.Lap 10 was my only major problem when both my eyes froze and I committed the cardinal sin of removing my right hand glove (Greg Whyte had only told me about 400 or so times NEVER to do that!) to un stick my right eye which had only just iced over. Within no more than 20 seconds my thumb had frozen and was turning a delicate shade of white at the top (the first sign of frost nip) so I had to haretail fairly rapidly (well sort of!) back to the refreshment tent,fortunatelyonly a third of a lap away, where they applied heat and TLC to ensure that I didn’t loose my thumb.All the runners were concerned for each other, the comradarie both immense and intense.

So eventually the race was won in a fraction under 5 hours and I came in (not last as I expected !!) in 8 hours 34 minutes 44 seconds. Crossing the line was a lifetime moment that I shall never forget followed by a feeling of intense nausea and 90 minutes of constant convulsive body shaking! Some of the other competitors came round, stripped me of my sweaty gear, which had now turned to ice on my body, warmed me up, redressed me and threw me in a cosy sleeping bag I am as indebted to them as I am to all of you who have supported this project of mine both financially and spiritually!

So finally .. its over and your junk boxes will no longer be bombarded !

Thank you all so much for your patience and your support: between us all we have raised enough money to give young Alex Field the opportunity of his life saving treatment.

All of my good wishes and positive thoughts now go to him ” his battle is far more important than my challenge !! 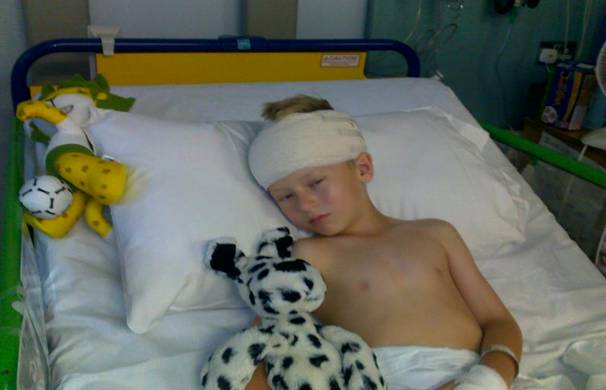