Last weekend 12 members of Leon’s friends and family (and two extra drivers) took on the 3 Peaks Challenge in a bid to raise £5000 towards Leon’s fundraising campaign. 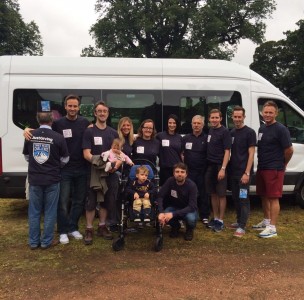 Leon suffers from Cerebral Palsy so, his family and friends are raising funds from the 3 peaks challenge to go towards his life changing treatment SDR (Selective Dorsal Rhizotomy) and physiotherapy, that will one day enable him to walk.

The team, armed with brilliant original logo T-shirts, wristbands and donation boxes, were hoping to raise £5,000 to help Leon walk by climbing all 3 peaks in 24 hours. Leon’s fantastic team smashed that total before they even started the first climb, Ben Nevis! The team, that included Leon’s father Charlie, Uncle Wojtek and Grandad Jerzy (one of the drivers), are now hoping to reach £6,000. (They are currently at  just over £5,700)

Their first climb was Ben Nevis in Scotland which they started at 5pm, where everyone but two members reached the summit, in an incredible five hour timing!

On the way down, a member of the team came across a lady from Taiwan who seemed disorientated and they proceeded to help her down to the 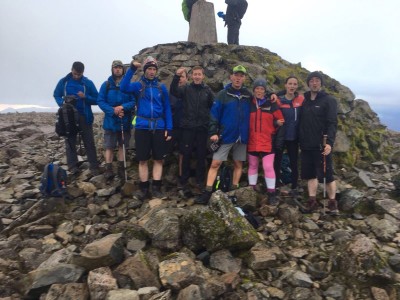 bottom. It turns out that she had started up the mountain at 12pm that day and was dehydrated, scared and alone when they met her. Thee wonderful team accompanied her to the bottom of the mountain, ensured she had some water and food and took her to her hotel. The next day the team received this message on the JustGiving page from Meng along with a donation for £50: “Thanks for your kind hands yesterday in Ben Nevis. Now I would like to pass my luck to Leon. Good luck!!!”

Fortunately, the weather  held out on Ben Nevis and everyone was in great spirits however, by the time the team reached their second Mountain (The highest in England!) Scafell Pike in the Lake District, they were tired and it was dark, wet and foggy. The ascent began at 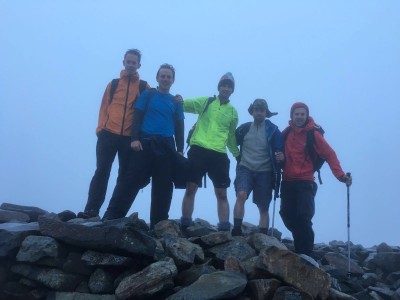 5am.. Unfortunately they came across a stream that had flooded and was now a risk that only seven of the group managed to cross. The remaining five returned to camp after a guide issued a hazard warning making it unsafe to cross.

By 8am the challengers returned to the minibus and headed towards their final (enormous) hurdle Mount Snowdon in Wales. The weather at Snowdon had gotten even worse so although the entire group summited, they were all drenched and exhausted by the time they reached the bottom. Four out of the original twelve completed the challenge in 24 hours and the rest were not far off. 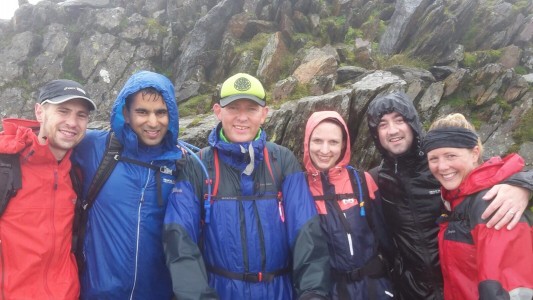 Leon’s Mother says ‘We are incredibly proud of their superhuman efforts against the elements and of the amazing amount that they have raised for Leon. Their challenge was followed by many on Facebook and the support has been overwhelming. The 3 Peaks for Leon Team have helped us to reach £48,000 of our £60,000 target. ‘

You are still able to donate to their once in a life time challenge so please help them reach £6,000 by heading to: www.justgiving.com/fundraising/3peakschallengeforleon